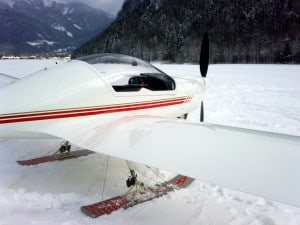 As promised the pictures from soaring with a motor-glider in the snow. As you can see it is not always necessary to go overseas to have fun with [motor] gliding in Europe.
This is Unterwössen and my friend Maria from Munich, send them to me. On the picture her husband Dieter. One of the club members  of Unterwössen . Güstl, every year helps out to put the skies under the glider.On the pictures as well ….BALLOONS… one flying and a few ready to go up. 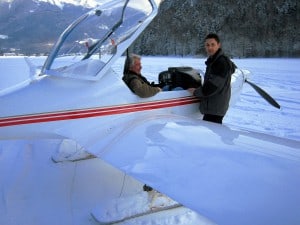 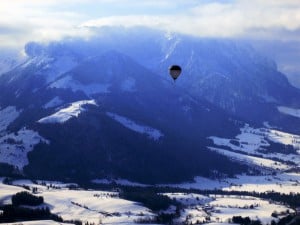 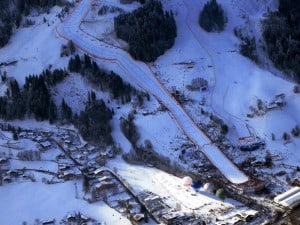 The first meetings   have been held last weekend for the Dutch Gliding Nationals;The CAE NLS National Championships 2011, flown at the National center of Terlet at Arnhem, between May 16-27. The new website will be in the air from next week on.
www.nkzweefvliegen.nl
And in Arboga in Sweden they are very busy with the preparations for the WWGC.  The plan for me, was to be there , but at this stage they need all the money to run a good competition,  which is of course first priority. In the 4 years after they got the bid and straight away checked on me if I could be available…and now, a lot has changed in this world.
No worries , I keep an eye on them from far away as there are enough girls to get info from.
I wish Mats, the competition director and his team all the best!!!!!!

Yes the new season soon will start  and what will it bring us ????
European Championships, in Pociunai in Lithuania for the big ones,  the smaller ships go to Nitra in Slovakia and then of course the JWGC in Musbach, with so many real top talents from everywhere, also from Holland!!!
Many national comps will be flown and then the next WGC will be in 2012 in Argentina at Chavez and in Uvalde Texas in the USA. So enough for all of us to look ahead to. 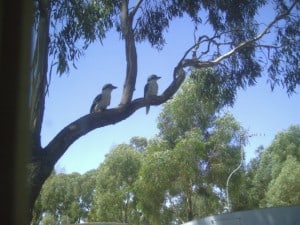 Kookaburra’s at Dundees caravan with 42 dgr.

On Monday I got the message that  it was 40 dgr. in Tocumwal. On Tuesday even 42!!!!Finally some sunny dry conditions, for both Toc. and Corowa. In Corowa they had a good day on Sunday as well with a flight over 700 km. So the last days of January made pilots forget the “pretty louzy” weather they had. But atleast they had not a cyclone called Bianca,  like Beverley, what a disaster!!!
Vasant , who was already a  visitor at Sportavia in the past, flew his silver C, “finally ” as he mentioned. Great weather but it started a bit late!

Some more news about the violent and extreme weather in Australia . Not used to such weather in Australia,  I must say! Now the NE of Queensland is in for a new hammering  called “Yasi” and waiting for this category 5 cyclone and even hurricane-proofed-houses could not be safe. It will start about 12 our time here, so in a few hours.
Here is how it looks. George and Diana, known to a lot of you as former owner and tuggie at Sportavia are expecting the worst in Cairns, look at this:

http://www.usno.navy.mil/NOOC/nmfc-ph/RSS/jtwc/warnings/sh1111.gif
I checked these links and they should work.
Just received the next news;
—While I write this Australia is in the middle of another extreme weather event. A category 5 cyclone is approaching the North QLD coast and is the biggest storm to ever hit us. The cyclone is not even able to be tracked properly as it has already destroyed the  weather tracking station on an offshore island. We are hoping for the best but expecting the worst.—
All the best for all over there!!!!
February started with great soaring-conditions  [for what it is worth, but as said before life goes on] in the heat in Australia. Tocumwal had yesterday an 835 km distance in the ASH 26E  [last kilometers the engine was used!] and I really hoped that even this late in the season it would be possible to fly a 1000 km. It happened before!!
Corowa had a 780 in an ASH 31 /MI21.
Last Monday KLM used bigger planes   to get people back from Cairo in Egypt . Not only Dutch people but also from other countries so they could transfer at Schiphol and continue to their final destiniastion. Very sad what’s happening there. At this stage 5000 Dutch people enjoy their holiday in Egypt and received the advise to come home quickly.Some prefer to stay on the pool and do not want to go, as they think the trouble is still far enough from their bed, read beaches, but inbetween jets and helicopters flew low over the demonstrators in Cairo.
On Sunday Transavia [ a 100% daughter of KLM] stopped with  flights to bring passengers to Hurghada and Sharm al Sheikh. My daughter came back from a stop in Luxor last saturday morning and to be honest I was worried even when the message was, that holiday places on the beaches at that time were safe. On Monday Transavia send 8 extra[empty]  planes to pick up 1500 passengers. They did this in cooperation with the travel agents. Yesterday evening all guests were back home again.
Coober Pedy will be in the future having its own soaring place.  I wrote you already about it and they are still going strong to get it all in good order. As I told you it is “on holy Aboriginal”  ground.
No pictures yet from the field but Dieter send me a few from Coober Pedy and I share them with his permission , with you.The first one is an inland sea and the second one ;the mines!
Have some problems in the end of this blog;can’t get space inbetween the head lines. Sorry about that and see you on Sunday. And all the best to my friends living on the East Coast of Australia . Here is a link with live coverage by ABC.Thanks Vanessa! And check which one you can use!!!! I can’t use both at the moment but that might be to frail connections at the time. Or just go to www.abc.net.au and you will find it aswell with also twitters from people in the middle of it.
http://www.abc.net.au/news/events/cyclone-yasi/
http://www.abc.net.au/news/events/cyclone-yasi/
Cheers Ritz 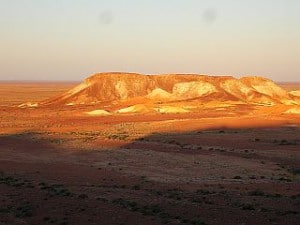 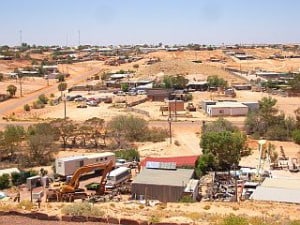 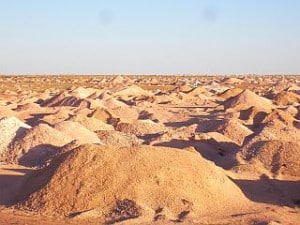