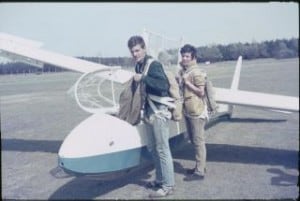 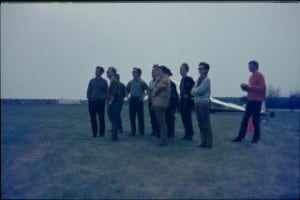 So on the end of 2011, a nostalgic retrospect not on this year but on the year 1967 in which I flew with the ZES. The pictures above are from a good friend who died with his glider during a camp  a couple of years ago; Hans Jonkers. He was the one who got me into gliding. The pictures have been scanned over Christmas, by a member of the Gliding club ZES now, Ton who got them from Hans ‘family and ….I love them! Great memories! THANKS!
On the left picture; Kees and I ready for a competition day in the KA 7.
Yesterday it was 24 years ago that Kees died in France. He crashed against a mountain, flying his hang glider. Kees was world champion in gliding in Hobbs!!! He also was our best family-friend.

And then…… THANK you for ALL YOUR Christmas greetings  and  with the help of Marina and Antti,I can add next year 2 more Christmas wishes then this year . After Dutch, French, German and English ,there will be Buon Natale and Hyvää Jouvula. There you go , never too old to learn.

Promised you some news about the “maiden flight” of 2 new top open class gliders . The flights were on December 23.
The Quintus M is the new super toy from Schempp-Hirth, for years and years manufacturers of top-gliders. At 14.30 Tilo himself brought the plane ,a 23 span single seater up in the air. During this first flight,  Tilo found the glider harmonic and easy to handle and he started the engine in the air,  which seems to be TOO easy as well,  due to an automatic system. The glider climbs then with 3.5 and 4.3 m/s. See for all the news and lots of pictures to the 2  links I got from Ludwig[Thanks!!]  at
http://www.schempp-hirth.com/index.php?id=126&tx_ttnews[tt_news]=477&tx_ttnews[backPid]=130&cHash=95e115282d

Partner from Schempp-Hirth, Lange Aviation, showed at 15.21 also on December 23 their brand-new Antares 23E and Axel Lange launched himself in this beautiful “ship”. Nearly sound- less as the electric engine is powerful but silent.
He said he was sure that even more fun in soaring an open class glider was made possible now!
http://www.lange-flugzeugbau.com/htm/deutsch/aktuelles/news_2011_12_23.html
I love the open class.

More well known pilots have settled down in Namibia, so is 3 times World champion Michael Sommer from Germany in Pokweni, where he straight away flew a 1.068 FAI triangle,  on his first flight, in an EB 28. The second day was good for another 1.135 km. flight. Yesterday it was 1.168 km with a speed of 137 km/h. Topping the OLC list 3 days in a row. Not bad!
Rafi Luski from Israël is in Bitterwasser and he flew a 1000 yesterday [750 FAI triangle] . I noticed Henrik Breidahl from Denmark as well. [Bitterwasser. ]

Disaster on Australia’s Gold Coastwhere over Christmas the house from celebrity chef Matt Golinsky from the program ” Ready Steady Cook” burnt down in a terrible blaze killing his wife and 3 teenage daughters leaving him in critical condition in a hospital in Brisbane.
Matt , wanted to fly and was busy with his pilots license.[PPL]
Also a huge fire in Austria where lot’s of German and Dutch guests had to run for their lives to safety after their hotel burnt down. The very famous wooden 4 star hotel burnt out.

This was the last blog in 2011. A year with up’s and down’s world wide. We lost friends but babies from friends were born. A year full of for us far-away-wars, nature-disasters but also from happiness and love, beauty and joy.
In soaring we look ahead at the Benalla club class Nationals and the Nationals in Narromine in Australia. In Argentina also in the beginning of January,  the pre worlds in Chaves, where the whole French team is practising to belong to the best next year. We have 2 WGC’s to look forward too and lots of great comps and flights on the OLC. But also first SOLO and C certificate, diamonds etc.
To finish this year, I share with you some pictures from Mount Fuji in Japan, send to me by Hiroko,who flew and flies at Tocumwal, as I think Japan was hit worst this year.
Something which can create disaster [the last eruption was in 1707/1708] but also looks fantastic, from the air. 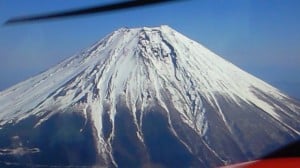 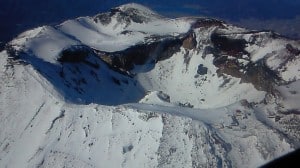 See you NEXT year in the year 2012! What will it bring?????
Enjoy the last days of 2011. Hope you enjoyed the blogs!? Sometimes I get a message from a reader and think gosh, is he/she reading too???? Anyhow THANKS for your ongoing support!
Cheers Ritz

Posted on December 28, 2011 Posted in Uncategorized