And yes ……. they are on line NOW. Here is the message and by all means have a look;

Dear friends,
I’m happy to announce that the first issue of segelfliegen’s  “international edition” is now online! For those of you who haven’t read our German magazine before, you find some brief information below.
At the moment, it is only available three times per year at this stage, but if there is enough interest, there’s a good chance of having a 2-months-frequency of publication.
Please give it a go and please send this information on to anyone who you think may be interested. To find out how it works just check
www.segelfliegen-magazin.de.

“segelfliegen – Das Magazin” was founded in 2003 and is said to be Germany’s most popular gliding magazine. For all international readers, an “international edition” has now been published, using modern digital distribution methods.
It is available for PC, Mac, iPad and Android-based tablet-PCs.
“segelfliegen – international edition” appears starting the 1st of October 2011.
“segelfliegen” contains information about gliding both for beginners and experts. The articles give detailed descriptions of the things glider pilots want to know, practically oriented, written by gliding experts and experienced glider pilots.
“segelfliegen” portrays the fascination of the silent sport in a uniqueway and provides great support to gliding clubs with its detailed articles.
“segelfliegen” international edition covers all important aspects of gliding:
– background information on recent events
– specialized articles about technology and science
– test reports on gliders and gliding equipment
– reports on international competitions
– coverage of the finest gliding areas around the world
– interviews with famous glider pilots
– practical advice for students, instructors and clubs
– news and information from IGC and OSTIV
More information can be found on www.segelfliegen-magazin.de  from
October onwards; this is also the only way to access the online-magazine.

If I had not seen it with my own eyes, I would NOT have believed it. September 29 and 29. dgr.C.  on a pole, in the shade,  in front of the shopping center!!!!!! Finally summer, we must have deserved it. Not only here but Germany, Belgium, France , Central Europe , they all enjoy the blue skies , awesome temperatures and nearly no wind; a strong HIGH is covering us all. People walk around with smiles from ear to ear. Interesting/ nice  to see how sun makes people HAPPY.!!!!
Perfect weather also for my Australian guest who arrived that day,for the next couple of weeks.
The visibility here is pretty poor and clouds were nowhere to be seen on Thursday neither Friday or yesterday, so the pilots here were less enthusiastic but more then happy with the sun; no  OLC flights over the last couple of days here in Holland.
Yesterday we had the warmest day-ever-measured in Holland in/on October 1 with 26 dgr.More to the S and E it was at some places  27 again.
Even the UK has a new record, yesterday it was 29.9 dgr. the warmest day EVER. Also Belgium shares in the records . 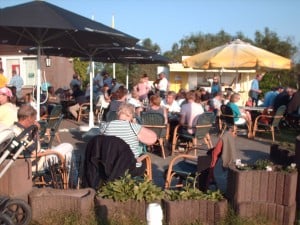 In Australia the Warwick State comps finished yesterday. After 2 non-flying-days, with rain , they continued on Friday. The “break” did not disturb the soaring mind of Bruce, so his 4th -1000- points- day was written down in the books; 365 km. was the task for 18m/open class, with 107 km /h. for him and in this class several outlandings. So not a real easy day.
The last day was cancelled so Bruce won with the max score of 4000 points out of 4 days in 18m and 18m/open combined!!!!!!! 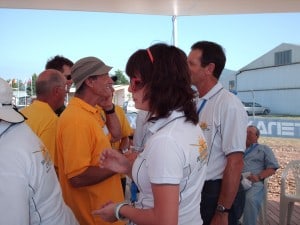 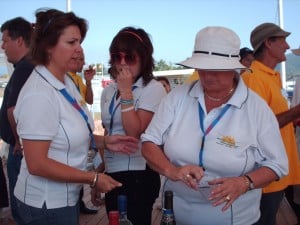 Going through these pictures I found a nice one from Art [Grant from Canada] as well. On Facebook I saw he had hurt himself “playing volley ball with the boys”.
“Not the best day. I tore my Achilles tendon this morning playing volley ball with the senior boys. Time to listen to my head instead of my heart.”
Who does not know ART? Either you find him at the weigh stations on several WGC’s or behind the microphone talking you through the virtual flights of competitors with his nice heavy voice. Get well better soon Art!! 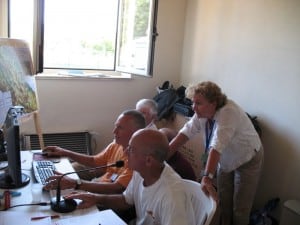 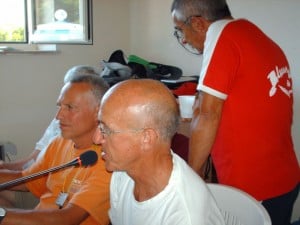 Art in Rieti as “the voice”. [archive]

Having installed Picasa, it is easier to find pictures so another nice one;
The European champion and the Junior World Champion together at the Dutch Nationals in May. 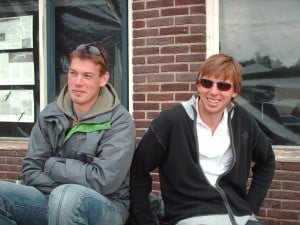 And then this; 2 Kids enjoy the pleasure of a FERRIS WHEEL on the beach about 250 km. N of Sydney. Then a plane is “enjoying” the wheel as well. Not planned but the single engine pilot hung in the wheel with a mate. Of course they first freed the 2 kids [9 and 13] and later the pilot and his passenger. It was in fact the best moment to ” hit” , if you can talk about a best moment in such a case , as due to a big shower all kids except 2 had left the wheel. Just before it was FULL!!!
Nobody was hurt but it remains weird/ bizarre . The pilot  started from a close-by airfield and said he never saw the wheel.
Here is the link I got from Vanessa in Australia;
http://www.abc.net.au/news/2011-10-01/plane-crashes-into-nsw-ferris-wheel/3204912

That’s it for now. See you again on Wednesday.
Cheers Ritz

Posted on October 2, 2011 Posted in Uncategorized