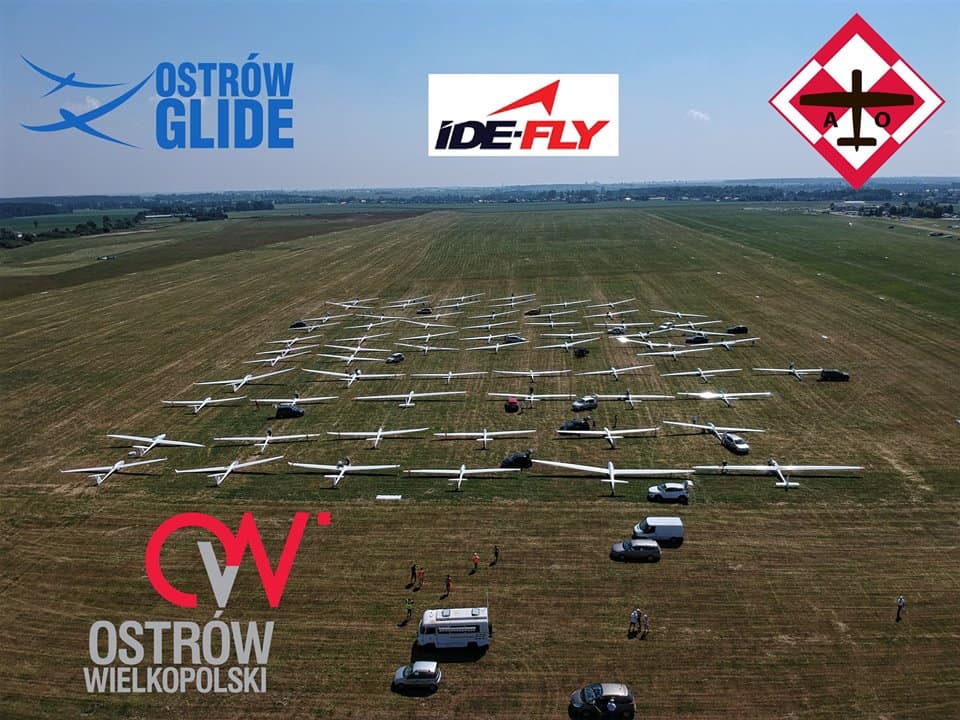 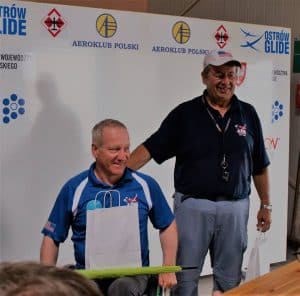 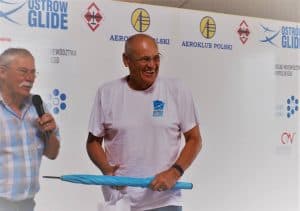 Adam and co pilot Fernando [15 m] and Stanislaw [club].
As shared by the organizers. 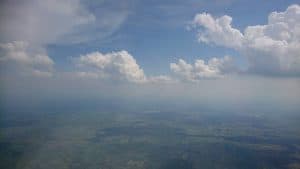 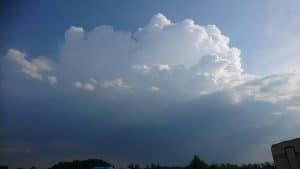 Today’s weather-en-route, as shared by Per. 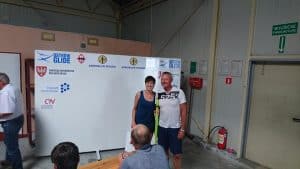 the daily French winners Eric and Amelie
as shared by the organizers.

Final conclusion from the Swedish team;”We have had one week of beautiful weather. So far has it been 7 days out of 8 and with reasonably long tasks. Tomorrow will it rain so the competition is over for this time. We have learned a lot about the local conditions, hopefully can we use this new insight at the WGC.”
Rain on Saturday so,Friday-evening- dinner from the Swedish and  French team together,  to finish this practice -period ….unfortunately  no last day of soaring for Club class. But the scores were pretty clear already. 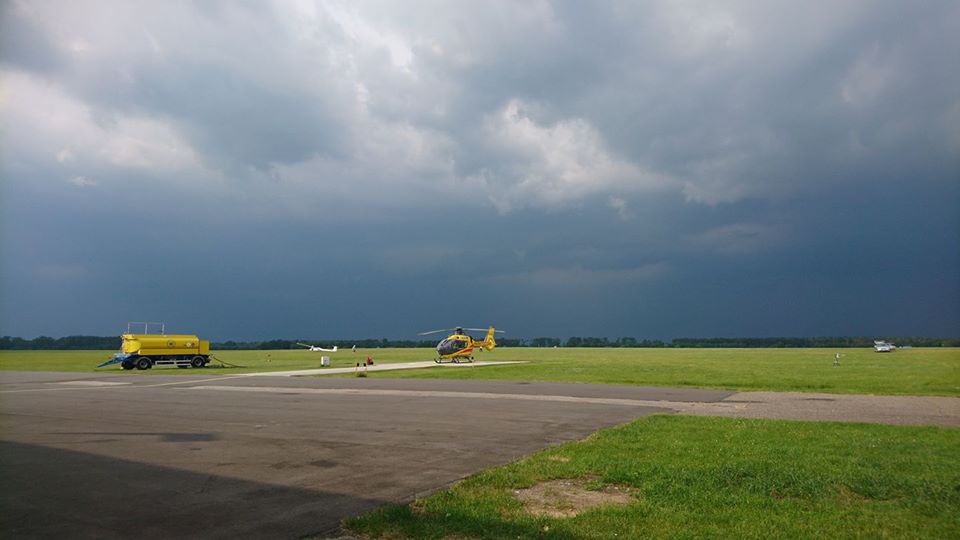 Last-day-weather, as shared by Per.

——–“A-last -minute” Change of venue for the 35th World Gliding Championships in the Open, 18m, and 20m Classes…..
Is a logistical nightmare for many!!!! For organizers, even when they are the same people, who must have been nearly ready for Pribam, but even more for TC’s, who had hoped to have organized accommodation, car’s, trailers etc for their teams a year or more ahead, in the Pribam-area and all in vain.
A TOO late call in my opinion. When the field in Pribam IS not big enough for 90 gliders now,…. it was not big enough either on the moment from the bid!!!!!
AND,…what about my club the ZES??? They booked the field HOSIN, for their summer soaring holiday!!!! Not easy to find something else so quick.
May I just say…..STUPID !!!!!

——–South African team at the WGC’s;
The teams for Poland and Czech:

In case you missed the publication elsewhere, the British Team selection for the 35th FAI WGC 2018 is;
Poland

It getting closer now and so excitement levels are increasing!

——–Swedish FAI SGP;
Boras continued on Wednesday with race 3 from 344.72 km. With a speed of 121.08 km./h Jon Gatfield did well and received 8 points.
Winner from the day before, David Gustavsson, in the LAK 17 did NOT start!!! He mentioned earlier how good the VENTUS 3 climbs!!!
Race 4 with 153 km. [ a very blue and hot day] , had an international top. Peter Cutting from Sweden won the day and the 7 points.5 Points for UK pilot Jon and and 4 and 3 for the German pilots Christoph and Stephan.
Bad day for Boerje and David violating the airspace , so “outlanding” after 23 km.
8 Pilots and 6 times penalties!!!
Race 5; 230 km. with a late start at 15.15 . The VENTUS 3 with Boerje in it, won the 9 daily points. This brings him on a runner up spot behind Jon [22]  with one day to go;20 points and 18 for Christoph and Peter, so possibilities enough for these men. It was another blue , hot day, so gaggles,….”the gaggle wins on day’s like this ” and then “trying to push away from them” for “private” final glides.
Race 6; is” the cherry on the cake” with 378 km !!!! Quite a lot for a GP.
with a speed of 137.8 km./h. Boerje raced over the circuit to win another day AND the Swedish FAI SGP.
A total of 31 points for him in the new Ventus 3.
Runner up with 26 points and also runner up for the day, Christoph. Not far behind Jon with 25 points.
Not too bad  weather as the “slowest” pilot for the day flew around with 122 km./h on the clock!!!
Stefan Langer was the only one who flew and finished all 6 races and got points on those day’s!!! 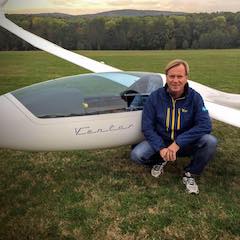 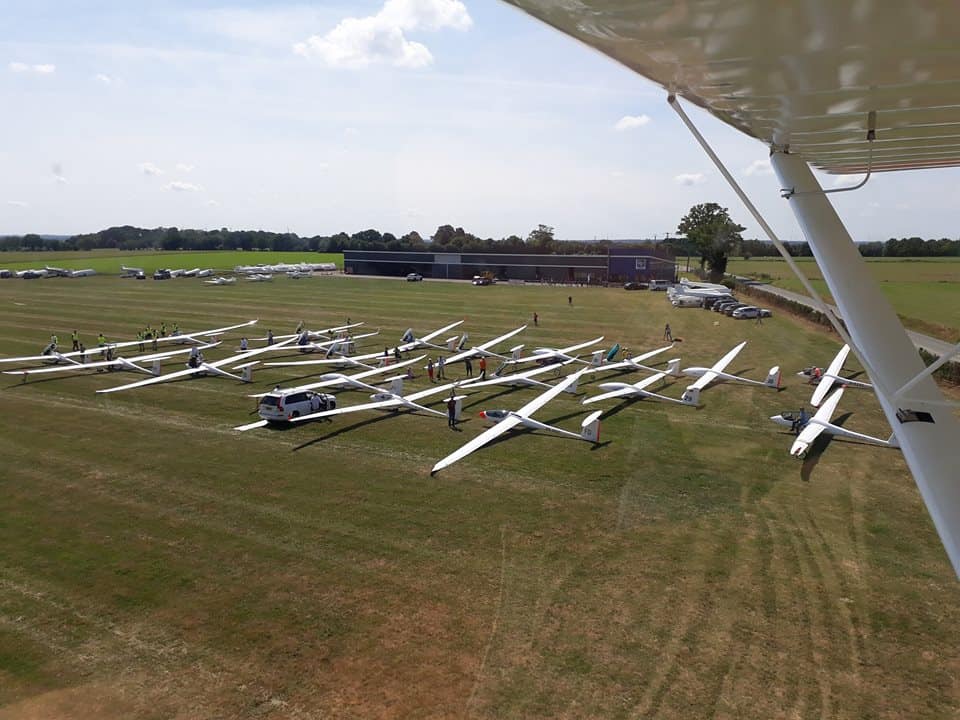 Last Sunday this French FAI SGP started for the 4th time from Rennes  Saint Sulpice in Bretagne, with some very good pilots. Among them 2 Dutch, the fresh new DUTCH open class champion Peter Millenaar [JS 3 ,I read this glider is for the first time in France!!] and many-times-WGC pilot, Jeroen Verkuijl.
Nearly all French pilots flying in the GP are toppers, so too many to call and from the UK Russell Cheetham is for sure a topper as is Gary Stingmore.
2 Spanish participants [AND a Spanish jury president, Angel Casado] and 1 from Belgium, from Slovenia and Switzerland. 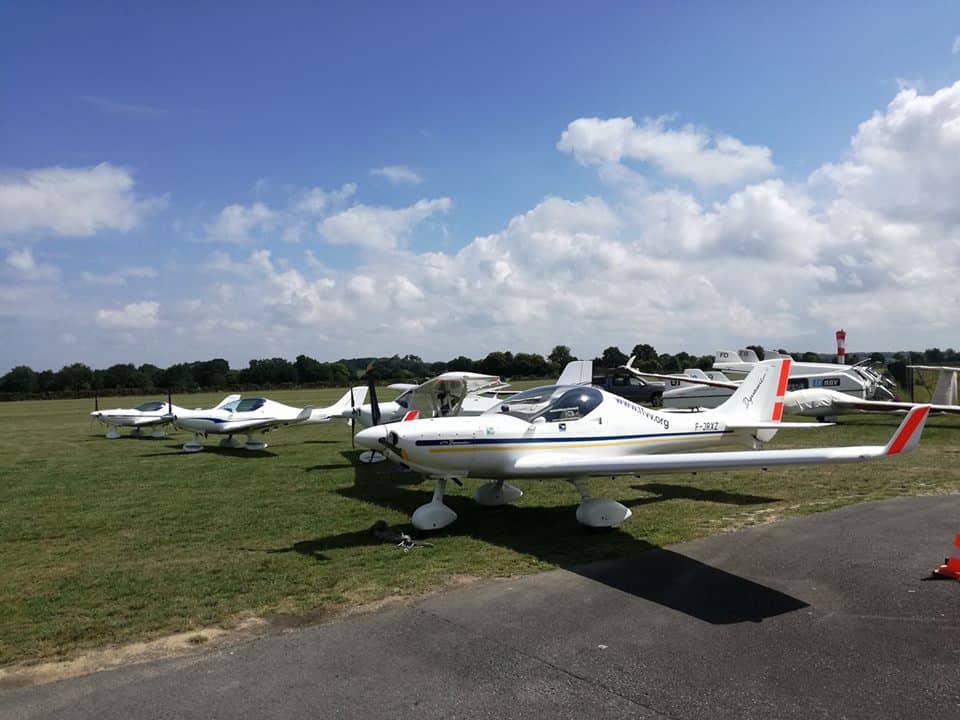 practice day 2….ready to go…..
As shared by the organizers. 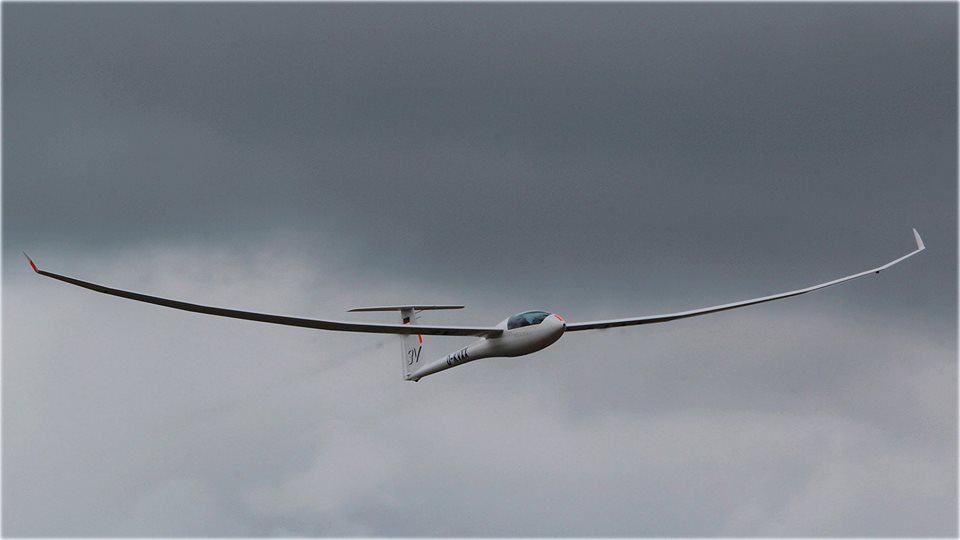 The magic VENTUS 3, first race winner, As shared by the organizers. 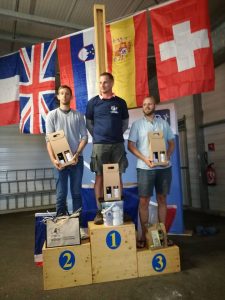 Nice presents!!!
As shared by the organizers.

Race 2; Another short …105 km….tricky day. Overcast and a bit of early-morning-rain  in Rennes, but hope for a day of soaring. Regatta start at 15.35.
BUT,….then the news from the organizers.
“What a day ! The rains stopped at 12:30. Gliders were rigged then launched at 15:35 for a 102km race.
The organisation sent a Dynamic to the eastern point during the task to be sure there was no danger. But the two last control points were impossible to reach, despite pilots were waiting at 1000m that the heay rain moved.
Finally the task has been cancelled to avoid any risk. Only three pilots are outlanded : V and E1 in almost the same field and 1L safely on Redon airport.
Congratulations to all pilots for their safe and sport behavior.
The International Party will start at 20:00.” 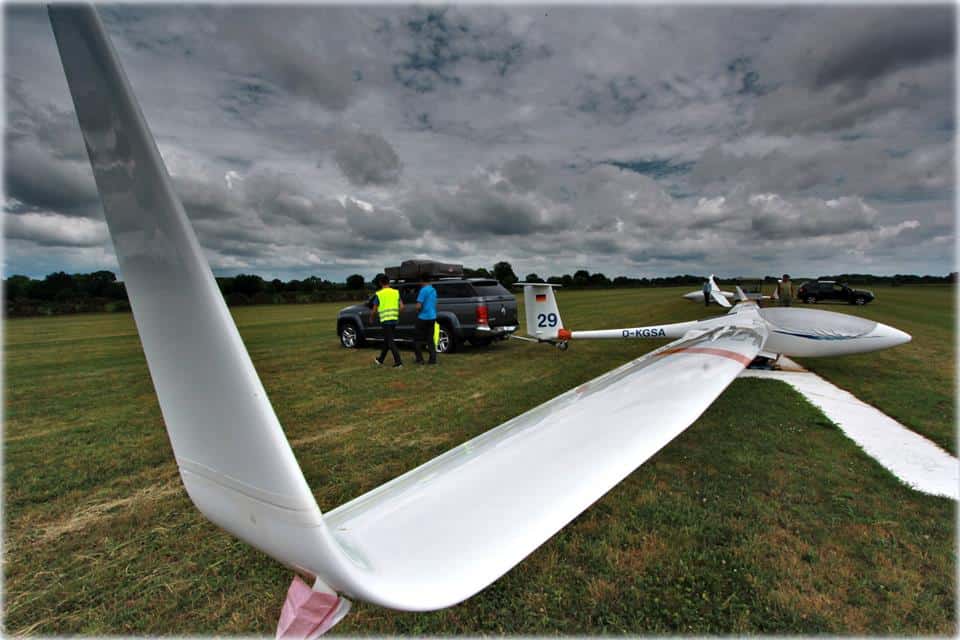 Day 2 weather as shared by the organizers. No points , 3 out-landings but the International party “made” the day.

Race 3;They tried again.Small task and late start; but,….in the end the day had to be scrubbed!!! 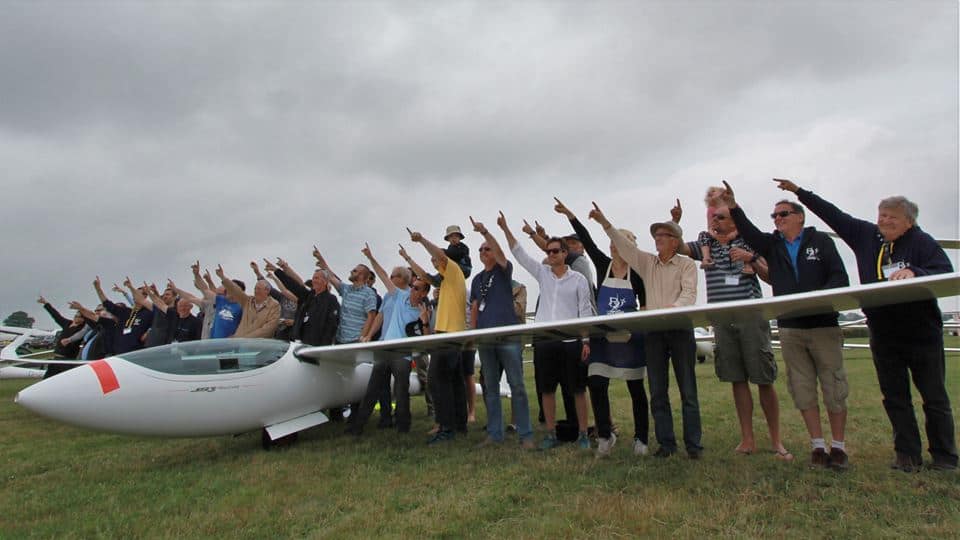 Pilots and crews……”Angry” at the weather-gods?????
As shared by the organizers. 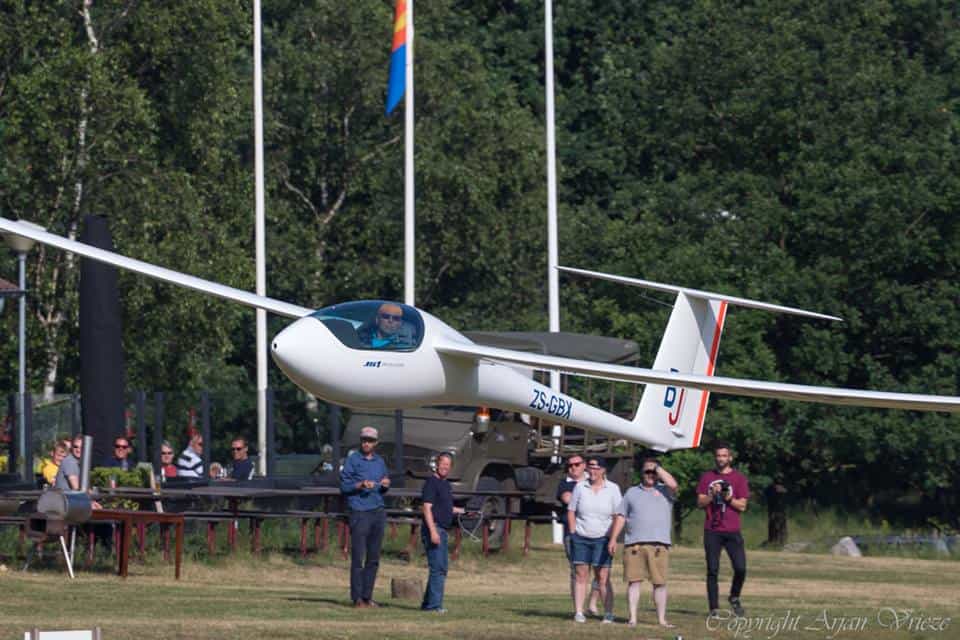 A WOW-factor finish/picture at the OMK on June 4. Typical Bas Seijffert-finish in the JS 1.
Courtesy Arjan Vrieze.
When I asked Arjan how the hell it was possible to take such a picture, he mentioned that he prepares VERY well before he takes the pictures. He knows the circuit of the finishing gliders, takes a ground- set and I-pad with Flight Radar. Also 2 ladies who help him  spotting the gliders. He has 2 professional camera’s with lenses. This fabulous picture was made with a 30 megapixel full frame camerawith a 500/4.0 lense on iso 400 and shutter speed of 1/1600. All pictures are in RAW.

Lot’s of pilots [59] again at Terlet for an always happy and interesting competition, between “old”  and “young” and experienced and novices.
17 in club, 13 in combi, 15 in the 20 m./2 seaterclass and 14 in 18m./open.
Monday was the first day and it took a while but in the end there was a window to fly in. No worries as ,whilst waiting the military helicopters [guess from Deelen] came to say hello and that looked pretty spectacular on the video!
First starters left around 4 PM with the B-tasks and only 2 classes up in the air!!!
2 seaters;150 km and Lizzy van Someren one of the young female talents flew the Duo Discus XL over 119 km and that was the best result, shared with the Hiemstra family from Friesland ;both 145 points.
open;161 km and 2 finishers Bas [Seijffert] and Sikko [Vermeer] . Some were only 10k out. 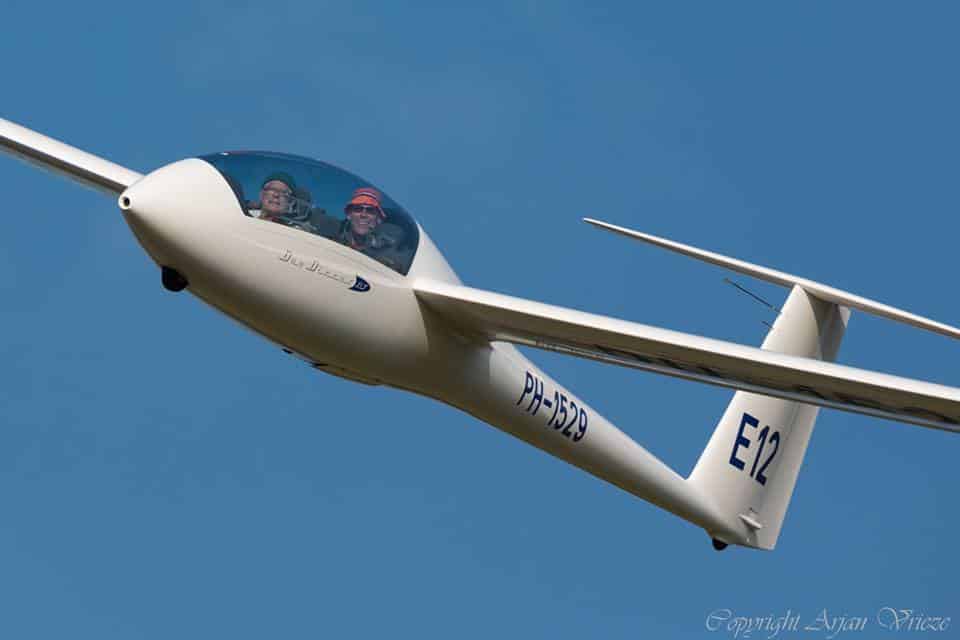 Another WOW factor picture, you can clearly see Reitze and Bas in the E 12 from the Gelderse.I guess they flew HC as they are not on the competitors list.
Another fabulous picture from Arjan Vrieze.

Task 2; It took quite a while before the ” milky stuff” disappeared, it hung all over Holland. In the end it ha[ppened and it turned out a rather good day with lot’s of finishers!!
Club 188 km; 71 km./h for Maurits Hebels in the St Cirrus followed by junior and vice JWGC champion Robin Smit with 67.91 km./h. [same glider]
Combi 183 km; top-day for the Dutch juniors all over 70 km./h. Annemiek former junior now TC was 5th.
2 seaters 177 km; Lizzy was “out” such a pity ,but the Hiemstra’s did well and won the day with 71 km./h.
open 192 km.;another Bas-day and the only one over 100 km.

——-On June 1 Ingo turned 78!!! Still young from heart he flies and flies and flies!!! On the picture a new student for him in Tocumwal Aaron. Dundee is still there and helps out. He leaves Toc today!!! 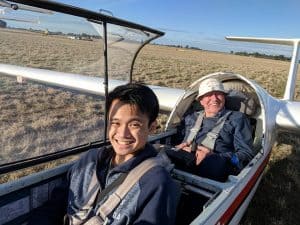 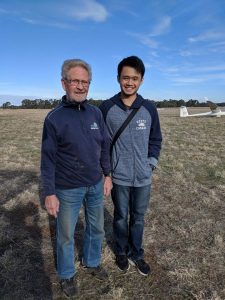 —-Last but not least; The Rayskala Masters will be flown between June 9 and 16, BUT,…I will be on holiday then so please look for scores at ; www.soaringspot.com and for news at http://www.rayskala.fi
“After record breaking warm May, temperatures dropped 10 degrees for monday June 4th. For glider pilots cold north-westerly flow means unlimited visibility, no bugs on the wings, good use for longjohns and kick-ass thermals. 3 days to go....”

Last Sunday Alexander Mueller flew from Bayreuth 1.195 km in the EB 29. I liked his comment; The EB 29 with an EDITION -wing and NO water even climbs when  only the moon shines.”
He added another 1000 on Monday.
Another 1000 from Winzeln [Germany]by Michael Schach in a Ventus 2CT [18 m.]
Also Uli [Schwenk] in the ETA flying on Sunday from Muensingen and Alexander [Spaeth] flying from Hornberg in the 15 m. Ventus 2ax flew a 1000 that day.

Before I go,……when you are young or a bit older and eager this is an opportunity !!!!!! I know as we gave these possibilities in our SPORTAVIA -time to many keen pilots as well

Minimum requirements:
100 hours gliding
Silver C
(We may consider less if you learned to fly in the mountains)

You must have, or be able to get, permission to work in New Zealand. If you live overseas and are under 35, you are probably eligible for a Working Holiday Visa.

We are in a remote rural location – great for outdoor activities but few shopping and nightlife opportunities.

To apply, send your CV to: info [at] glideomarama [dot] com 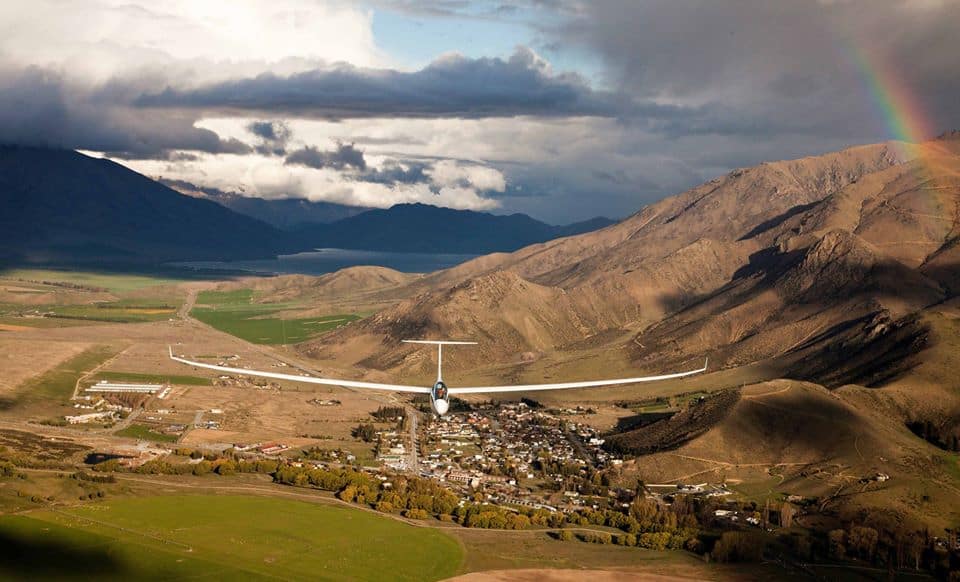 as shared by Glide Omarama 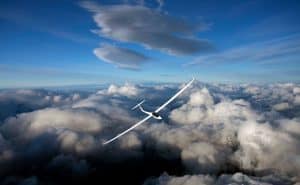 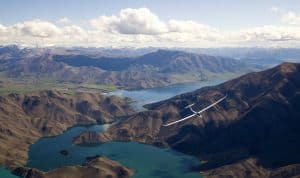 Posted on June 6, 2018 Posted in Uncategorized