Sorry…., for sure the die-hard-readers have noticed, that my last blog was published, but  finished rather abrupt.

Reason is clear,..problems with my laptop.
One of my Dutch friends Theo got rid of the problems after quite a few hours hours on phone and view-reader and en passant he installed Norton, refreshed google and cleared all other problems as one with my blog. It told me that  my IP , which turned out NOT MY IP ,blocked/ blacklisted me entering; so the future looks bright. Thanks Theo!!!

My friend Bill from the USA , had to help me with my blog. He could enter it ,I could not!!   Bill gave me a new login and password which worked well with him but not with me. He was so kind to publish already the text I had finished, but not really checked.
So another viewer- reading this time via SKYPE.
And…..no doubt… he had solved those problems very quick, so here I am again. Thanks Bill!!!

—–September was a weird month weather wise, here in Holland and in more places in  Europe. It was the wettest since 2001. An average of 130 mm. [87 is normal!!]
Hence, the average temperature was 0.8 dgr. lower .
We had the coldest EVER, 16th of September but last weekend summer revived with up to 25 dgr. C. 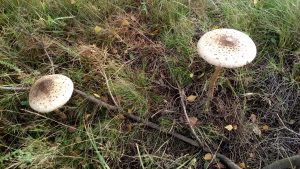 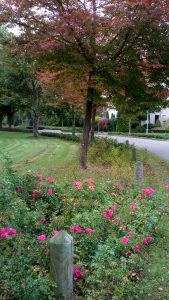 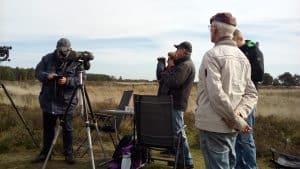 Autumn !!
Walking in the weekend,  through a park and a nature- reserve called “the Groote Heide” close to the Achelse Kluis a convent from the order of  the Trappists. We met some bird watchers and they showed us a fish-eagle, which was looking at their enthusiasm, pretty spectacular in this area.

——TOP WOMEN!!!
This  message from the British Gliding Association I really love to share;

Mylynn and Dina, from Oxford University gliding club, both completed the Standard Aerobatic badge this week at Bicester – learn more about glider aerobatics at https://members.gliding.co.uk/pilot-resources-flying-training/aerobatics/ 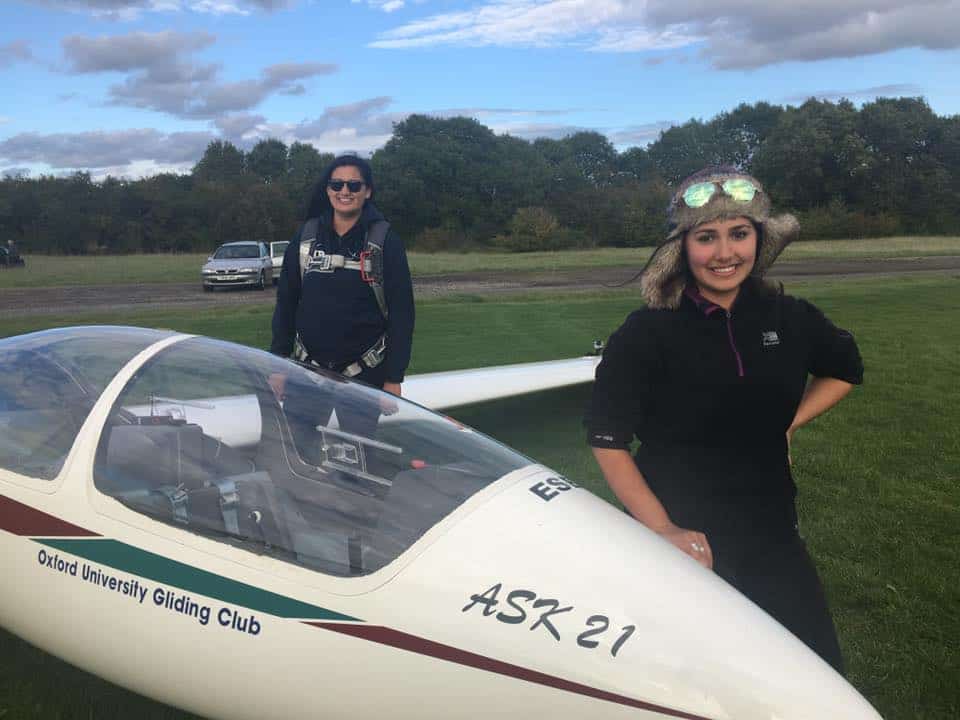 Toppers.
as shared by the BGA.

——Matthew Scutter published the new handicap list for club class; I am sure more will be interested,  so here is the list also published on his blog Matthew Scutter’s Gliding; 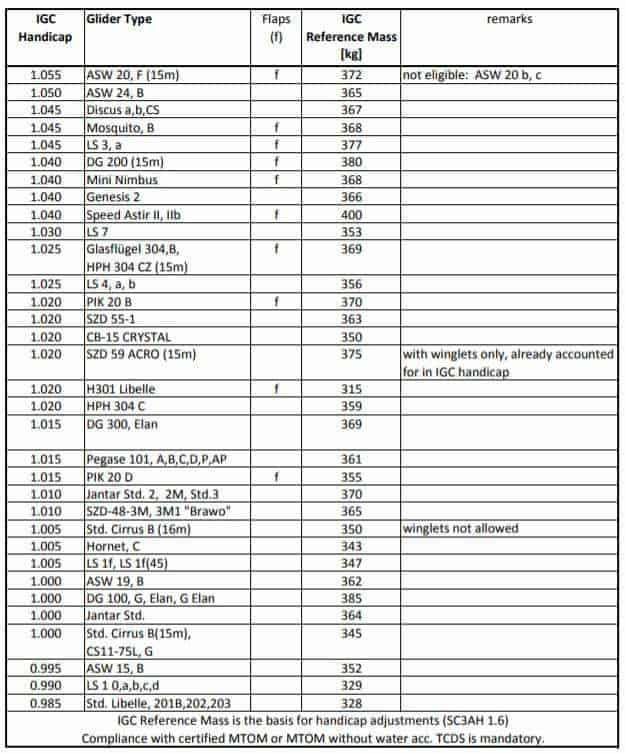 ——The SOUTH AFRICAN NATIONALS are in progress in Potchefstroom.
In Club class 11 participants, in 15 m. 13 , in 18 m. 22 [ and several European mates in this class]   and the 2-seaters fly around with 6 gliders, so another 12 pilots!
In 18 m. class Oscar Goudriaan flies his brand-new JS 3 . Already 7 of this successful JS 3-type fly in this competition. 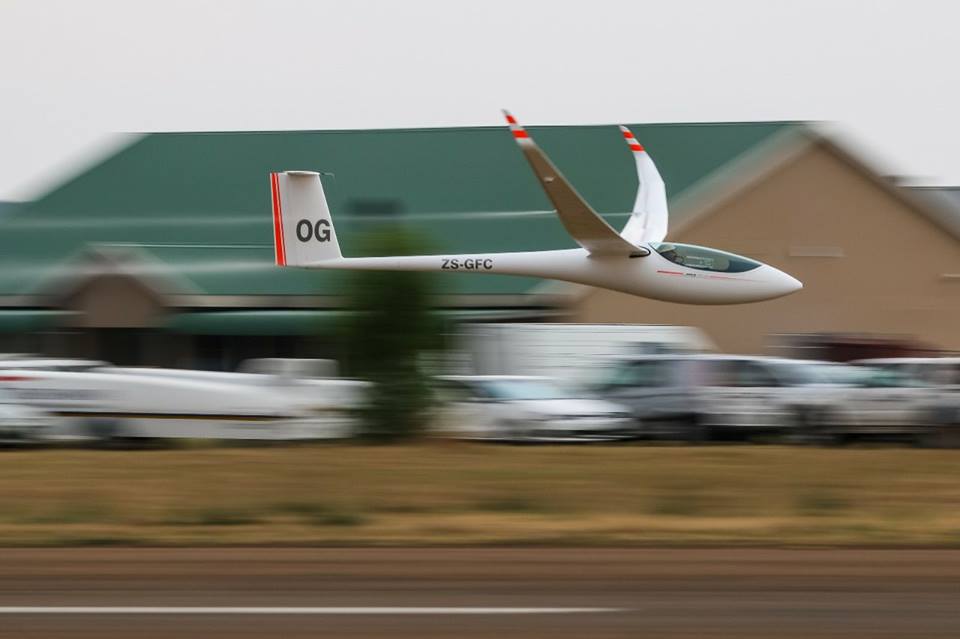 You can see the speed even on a picture!!
As shared by Oscar, but picture courtesy Robert Atkinson . 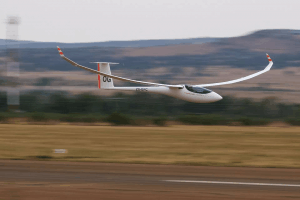 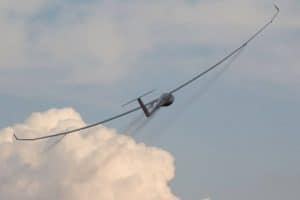 As shared by Jonker sailplanes.

These comps will finish this upcoming weekend. But the first days [September 30 practice and October 1] there were no tasks due to poor weather, on October 2 however it improved and all were airborne in just over an hour for 2.45 and 2.30 AAT’s!!

One of the long time guests at Potch, is Arne Boye-Moeller who flies now in Potch a JS 1. 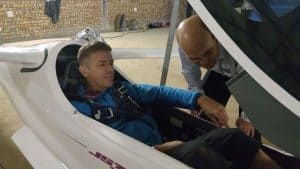 BUT,…..Arne with Uys, “test-sitting” the JS 3.
I “liked” his text with the picture and for sure,  through time , I knew what he means;
“An expensive moment “.

October 2 turned out an exciting day with good and bad circumstances as huge rainfall but still finishers. In 18 m. even 16. The top 5 was JS 3 then Arne in the JS 1. Winner;Hungaryan pilot Zoltan Kore; speed 137 km./h.over 363 km.
Followed by the brothers Laurens and Oscar and the brothers Uys and Attie.
One pilot mentioned ;
” an AAT of which the second leg ended under a huge CB , so a little detour was needed…
Still a very nice gliding day !” 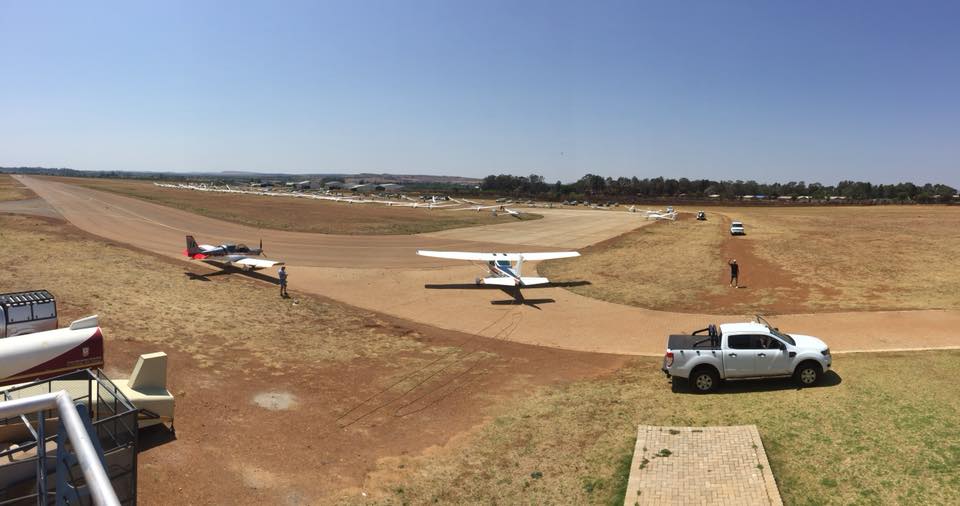 The October 3 official “after flying news” ;
“After Flying – 6.30 p.m.
The first pilot back did not complete the task, with some others following who also didn’t complete the task, but overall the pilots had a good day and some enjoyed the flight, whilst others found it a bit difficult. Some battled to get up for start, and the overdevelopment did not materialize. It seemed that it was fairly blue with more clouds in the second two sectors. It was a much drier than was expected, so overall – a good day’s flying. Thankfully everyone managed to get home with no out-landings so that is always pleasing, and now the beer sales are doing well!
The provisional results show that in the Club class Jaco Burger has won the day with a speed of 96.06 kph, Pieter Geldenhuys 2nd, and AP Kotze 3rd.
In the 2-seater class Mark Hutchings at 85.12 kph came 1st, with Arjan Schaap 2nd at 95.36 kph and 3rd Bruce Cherrington.
In the 15m. class Nico Le Roux managed 114.5 kph ahead of Dick Bradley at 110.39 kph, and 3rd Mark Holliday at 110.08 kph.
In the 18m/Open class Oscar Goudriaan led the field at 136.05 kph, with Laurens just behind him at 135.79 kph, followed in 3rd by Brett Hunter (NZ) at 128.64 kph.”

For today October 4 I share the next news:
” This morning there is once again cirrus upper cloud, but the wind is not as strong as yesterday, but the morning has a different feel to it. Pilots are getting their gliders weighed and out to the grid with the hopes of a flying day. The prediction for the booming S.African conditions do not appear to be working for this week. They are hoping to have a task today, but I gather tomorrow is not too hopeful. We will learn at briefing what the weather is going to be.”
Tasks today: Club…203 km, 15 m. and 2-seaters a 3 hour AAT and 18 m a 284 km. task.

The season did not start well in Australia, here is the sad news:
“With deep regret, we inform members of The Gliding Federation of Australia that on the afternoon of Saturday 30 September 2017, we lost one of our members in a single glider accident in a paddock off Murray Rd, North of Benalla VIC.  The deceased member is Mr Richard Robinson, an experienced glider pilot and member of Gliding Club of Victoria (GCV).
“Richard was flying his LS8-18 single seat glider that he recently acquired.  His glider was observed by a witness flying low near Murrays Rd, between the Midlands Highway and Benalla-Yarrawonga Road.  The glider was observed in a turn when the into-turn wing dropped and the glider impacted the ground.  ”
“Initial investigations have not indicated any airworthiness issues with the airframe prior to ground impact. Pilot medical issues will be investigated by Coronial authorities.”
Parts of the mail shared by Peter Cesco…GFA President.
Sincere condolences to his family and friends.

——Children grow up !!! And …too fast, meaning we are getting older!!! My long-longtime friends from Belgium, The Schmelzers ,celebrated the wedding of their son Bert jr and his by now lovely wife Barbara last weekend. I wish them ONLY HAPPINESS !!! 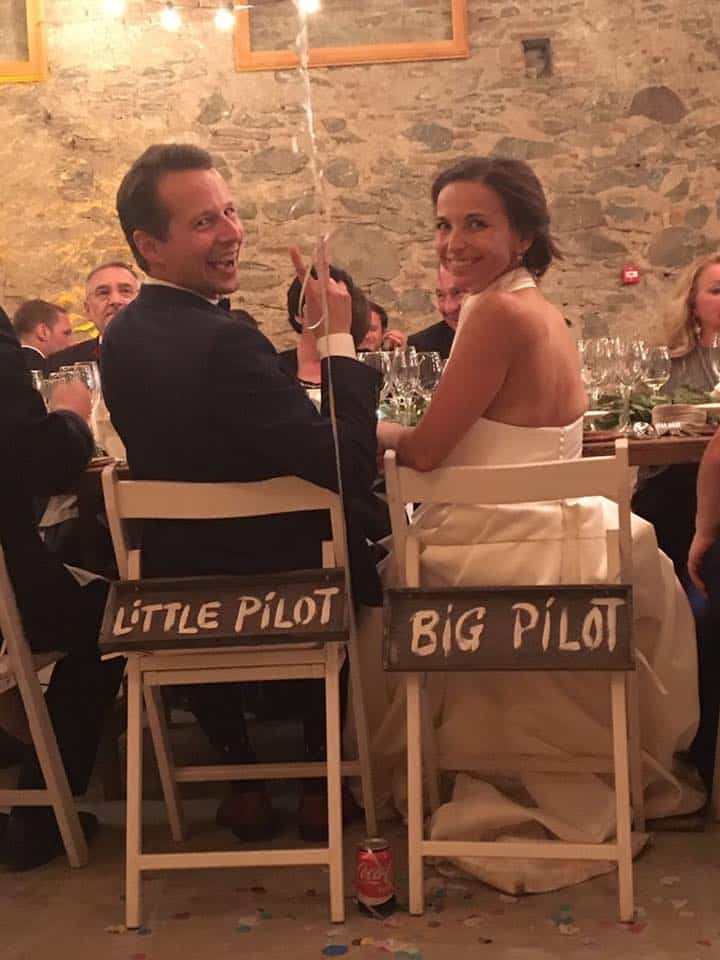 A very happy Bertje [ former WGC champion] and as happy, his beautiful wife Barbara.
As shared by Barbara.

–—–Very sad about Las Vegas.. my family just visited this beautiful and normally HAPPY TOWN. Sometimes I do not understand our world anymore!!

——-GLIDE OMARAMA in New Zealand published the next news with a happy beginning of the NZ season!!
“Today I had a beautiful spring thermal flight with Steve Curtis from Tocumwal. We flew up the Murchison valley at 7500′ with Mt Cook towering above us on our left. We took a thermal to get above the ridge-line and crossed into the Jollie. Nearing Omarama, we decided to go west and flew to Lake Hawea via the Dingle range. The clouds upwind were building and becoming showery so we ran downwind to the Lindis, and finished by running a honking convergence on the St Bathans range. Our soaring season has well and truly started!” 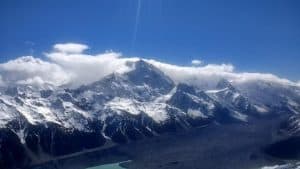 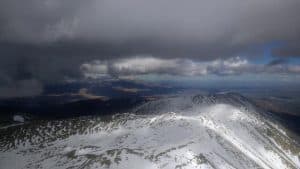 “Mt Cook from the mouth of the Murchison valley ” and ” Convergence on the St Bathans.”

——To finish the blog one of those great pictures by Geoff Soper also from New Zealand. 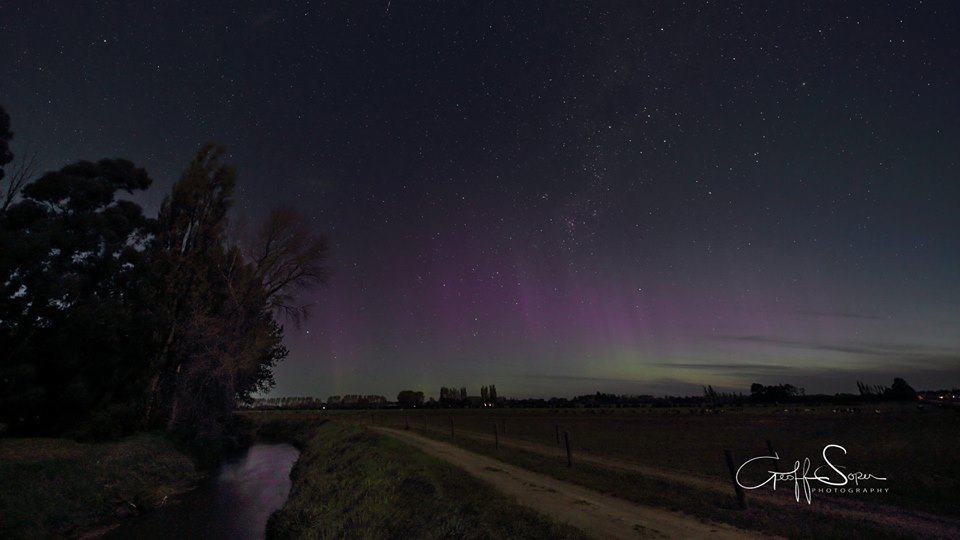 CU next week, so happy…….. this laptop is going like a “rocket”  again.