It’s such a pity for pilots, but also for the organisation, that the weather gods REFUSE to co-operate.
Wednesday was cancelled too, but you can only wait for the better weather to come. Many parts of Europe suffer from miserable weather ,but there is always hope!!!
Pocuinai, was “optimistic” for their first training day on Thursday.
Thursday in Moravska, was scrubbed too and a kart race for all who wanted was on the menu.
I have done that once too with all pilots and I can tell you some pilots/crew , really “turned into madmen”.But it was great FUN!!!! I was the slowest but had the fastest start.

They moved the INTERNATIONAL EVENING to this rainy week,..good thinking,…. and as you can see the pilots still had good fun, though some are “BORED”, we all understand. 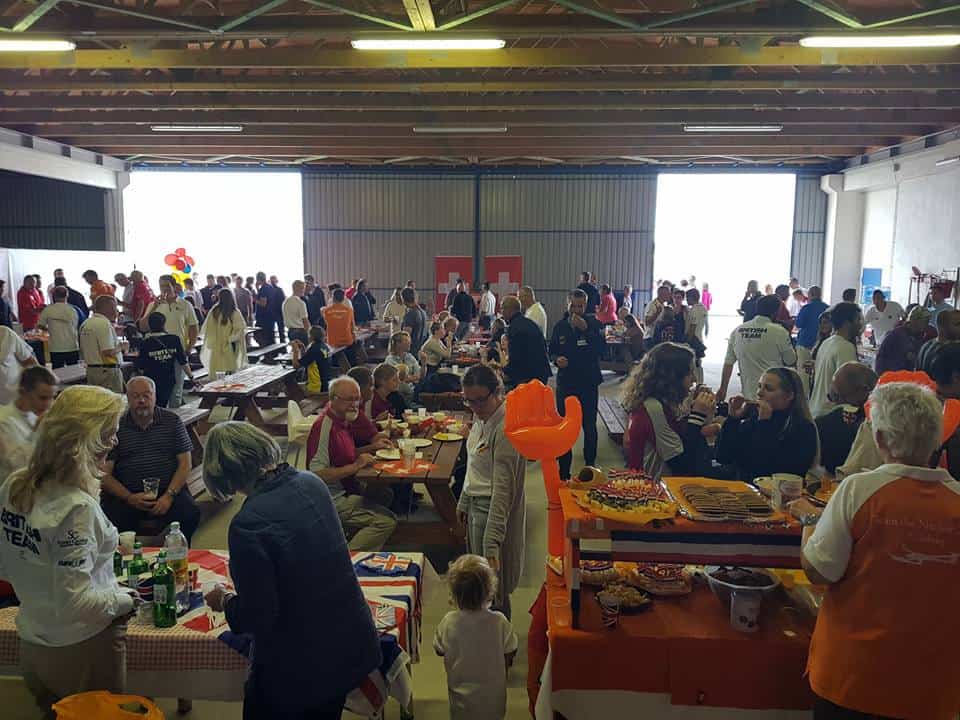 All teams did a good job !!!
Picture shared by the Dutch team.

Friday…July 28…day 6 …flying day 1 ???;the first news for the day was “CZECH EVENING, 19:00″.
BUT they had a briefing at 10 and gridding after the briefing.Team UK mentioned in the early morning;”we are sitting in the rain currently but we are hoping for a gap.” 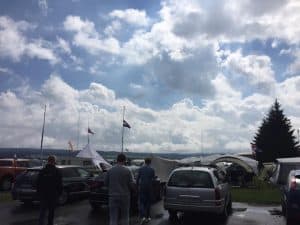 Hope grows on Friday, as shared by the Belgian team.

The organisation mentioned;”Please remove the gliders from the grid ASAP. More water is coming.”
Scrubbed again BUT,……..you can’t try harder than they do!!!!!AND,….
From Saturday on,  it looks very promising for a full week so,…NO WORRIES. 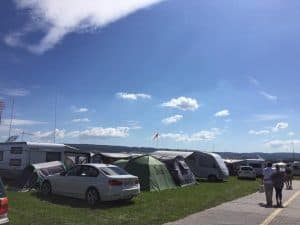 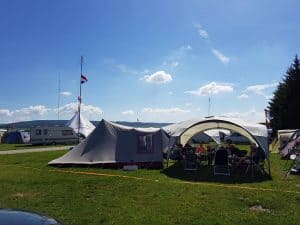 The weather on Saturday morning. As shared by the Belgian and the Dutch team. 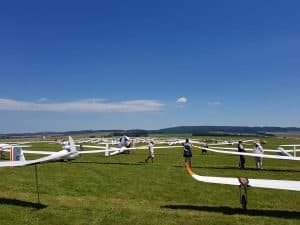 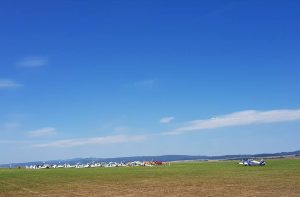 As shared by the Dutch team. 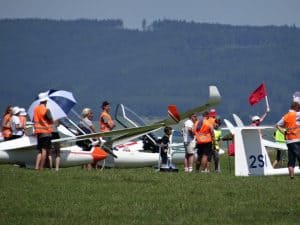 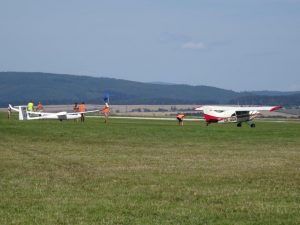 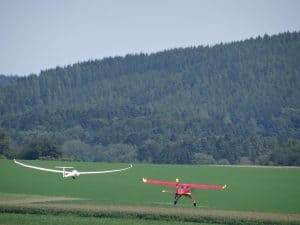 Ready to go .
As shared by the organizers.

club; racing task 236 km.
With no out-landers a good day. Specially for Thomas Suchanek as he will be given the daily prize in the morning. Good on him. Those former hang-glider pilots “feel”  the air.  Good day for Rasmus Orskov from Denmark with a 5th place. Less good day for the Dutch and German pilots. But “only ” around 200 points less for the slower pilots, who followed another route than others.
Standard; racing task 259 km.
Winners for the day were from Germany Marko Zettier and Holland Sjaak Selen, with a nice speed of 116 and 111 km./h. and 688 and 628 points. No one “aux-vaches”.
20 m.; racing task 251 km.
Another team- Kawa- from- Poland- daily- win. But good runners up from Finland Visa Matti and Harry. GOOD!!!600 for 549 points. All pilots were “in”  and team Rendla now was last.

They were a bit more lucky with the weather. After arrival , it was not really flyable but no worries,  the pilots could organize their “infrastructure” for this JWGC period, do their shopping and relax from the long trips for most.
“Infrastructure” looks different for all. 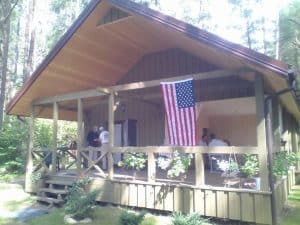 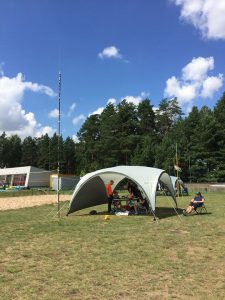 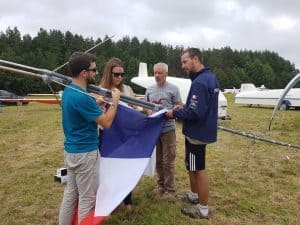 Team USA with their beautiful base. HEINEKEN GROUND,.. can only be DUTCH. Team France setting up the “radio-tower”.
As shared by the teams.

The 3 official practice day’s showed set tasks and 2 hour AAT’s in which practice was really possible,as well as out landings.Only 6 from 22 in standard ,finished on day 1 a day with a set task from 273 km.In club 14 from the 23, who were flying.Distance ;249 km.
Practice day 2 had 2 hour AAT’s. The weather looked good but was not as good as it looked. Some flew the task others choose the “fly around” 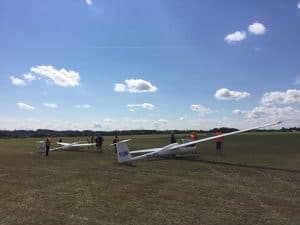 As shared by the Dutch juniors.

Practice day 3 had set tasks; 170 km. in club and there were 3 winners all 512 points Dutch pilot Nick and UK pilots Thomas and Jake with Robin from Holland just a tad later 512 points.
So enough good training,…. the REAL thing happens NOW. First the opening in a big sports-and entertainment-arena, in the local town of Prienai.
Here all team captains. Dutch Annemiek proudly in the middle. 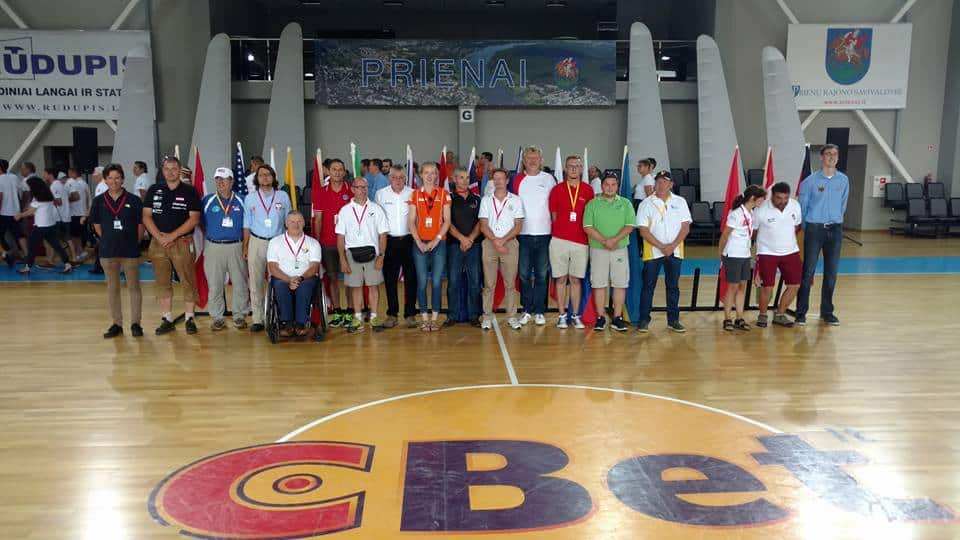 With to her right the CD of the comps Vytautas Sabeckis  and top TC Benjamin from France.
As shared by team USA via Tony. 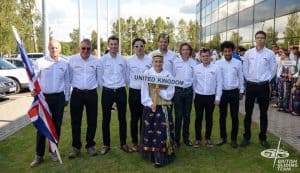 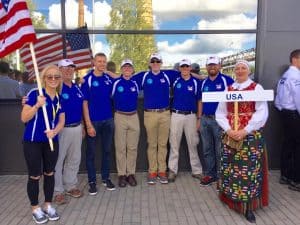 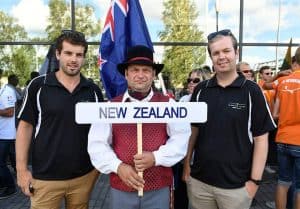 as shared by the teams UK, USA New Zealand. 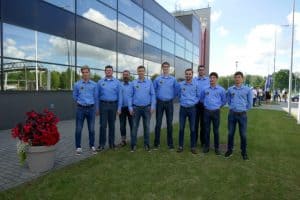 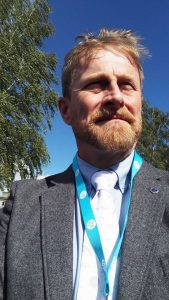 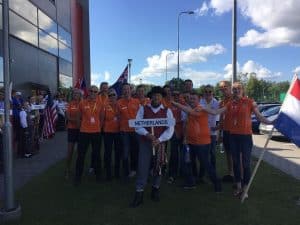 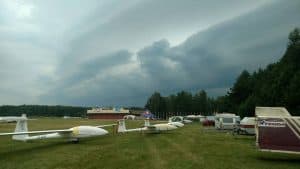 Thunderstorm close by .
as shared by Tony.

As said before Bruce and Brad , my Aussie mates, are flying this competition and as you know too, Bruce always reflects on his flights in his  Taylor’s Gliding Page
“Arrival in Texas has been greeted by heat, dust, storms and the usual fantastic cu’s and streets. Can’t wait to get airborne.“ 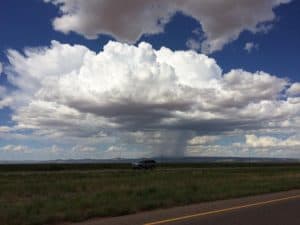 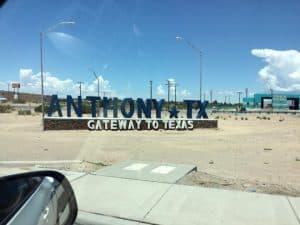 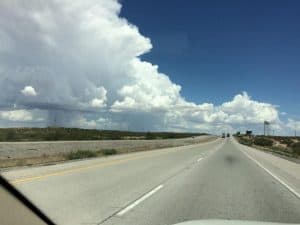 😊Today started a little bit blue, but some clouds started to appear not long before launch. Brad and I flew for about 3 1/2 hrs, and did a run to the south, (where it looked the worst but was actually the best) then north-west and north-east (where it looked great, but was a bit of a fiddle to find the best climbs)
The photo is to the south of Uvalde, and Brad is just above my winglet.
Good start, we are rigged and set up, and the flight discovered no real problems. Tonight we are eating in, so we can all get a decent sleep. Yesterday was a big day of driving, and we got to bed rather late.” 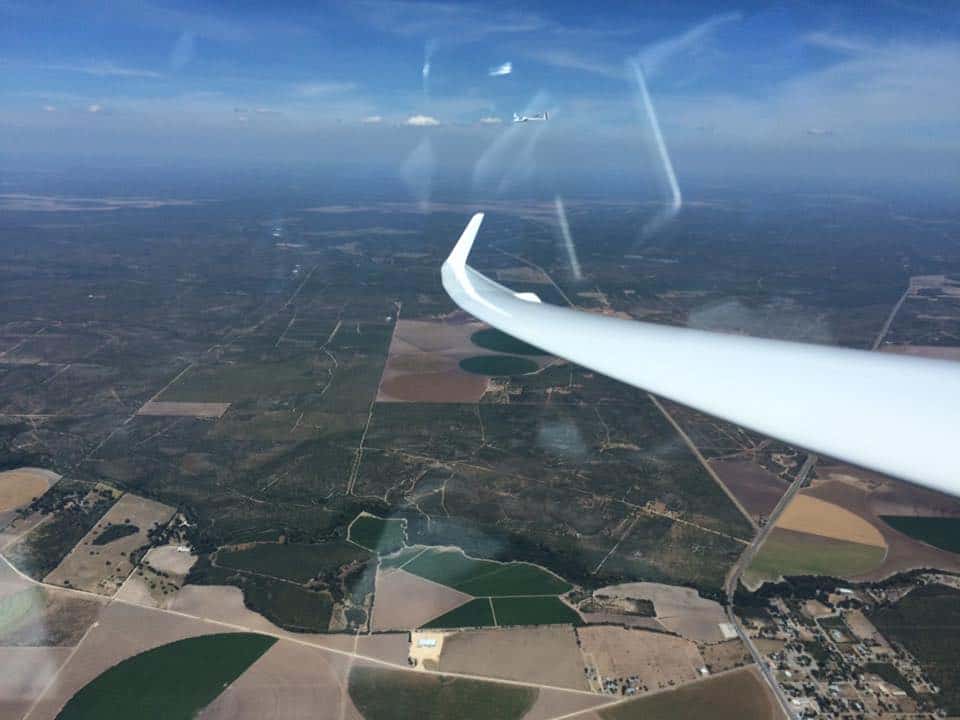 As shared by Bruce.

Yesterday was the first day and with an assigned  task of 285.29 miles the 33 pilots made the best out of the day. Bruce WON !!! Good on him, speed 88.13 miles /ph. Jerzy was runner up  but as Bruce flies HC, Jerzy won the day.All AG 29 in the top 6.
Brad was on spot 18.
“A big part of today was smokin’, and the other part was a bit rubbish. The trip was pretty fast until we went down to the south east, where the cirrus was a bit thicker, and the air was not as happy to go up. We had to slow up for about 40-50 miles, then it came good on the way home. Today was fun; there were a couple of fast guys just ahead of me, and I almost caught them at the edge of the difficult bit, but then I went slightly the wrong way and they stretched ahead again.” By Bruce

HpH Sailplanes UK
NEWS
AND THEN THERE WERE THREE… Evening of 25th July with a very strong wind blowing, Jaroslav Potmesil, owner of HPH sailplanes took the TwinShark on a short maiden flight. A huge thanks to the team who beat the odds to make this happen. The Twinshark is now the third and latest 20m flapped sailplane to market. 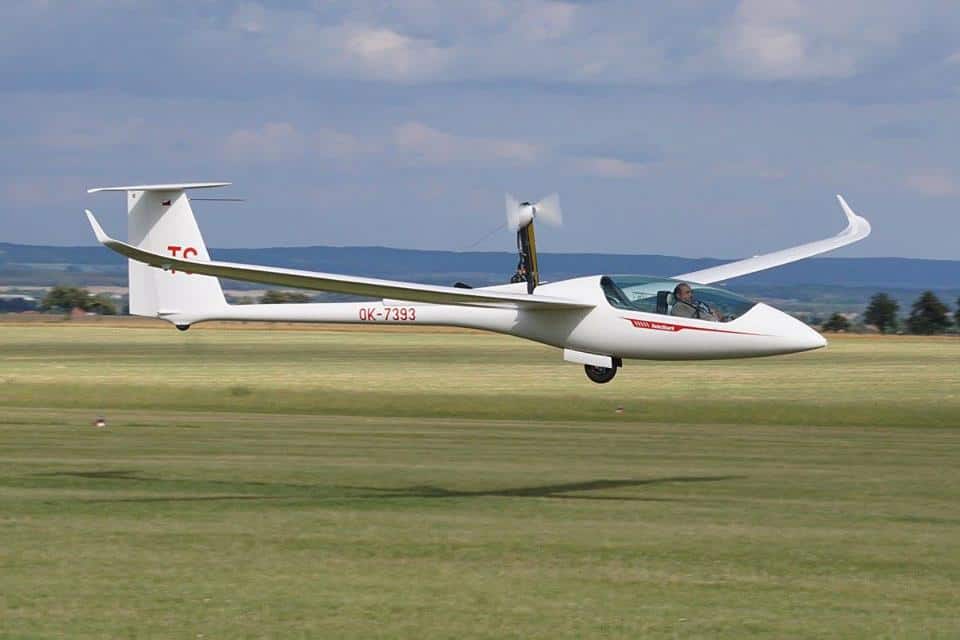 As shared by HpH Sailplanes Uk.

Between July 29 and August 5 , 83 participants are flying in 5 classes for the highest honors  .
On day 1 the pilots got IN THE AIR the B task so change of instruments and mindset.
So also there not the best conditions and a struggle for tasksetters to “work around the thunderstorms”.
2 Days of reasonable short tasks  around 200 km. and 1.30 AAT’ s and 2 days of no- flying in 4 classes,
Only Standard flew yesterday ,  so “only” 17 pilots in the air and nobody finished.
The set task was 171 km. and the best pilot flew 119 km. Tough day in the office!!!! 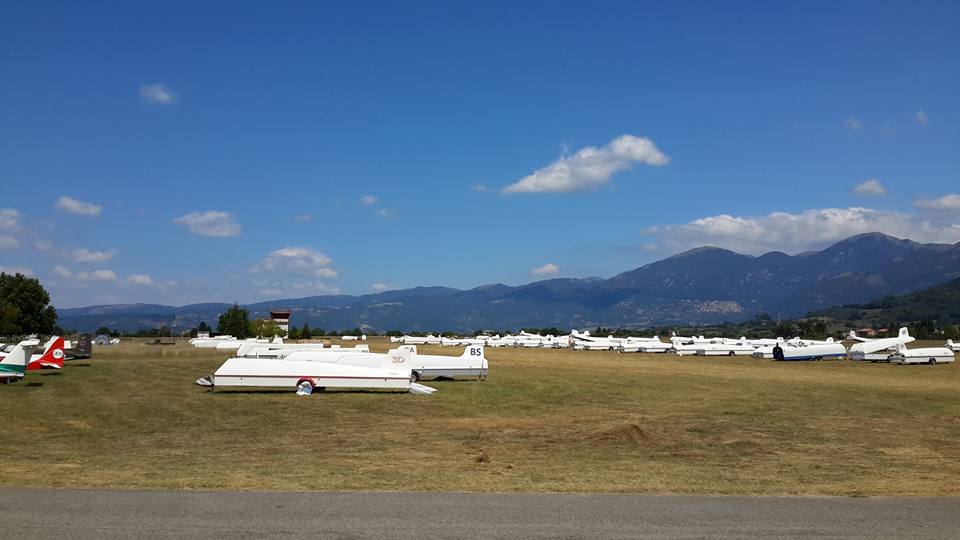 Aldo , my Gliding International colleague, from Italy is the CD from the CIM in Rieti; His message ;
“I’m directing the CIM in Rieti. Astonishing weather! 167.3 km/h in the Open Class…I envy them!”
They started yesterday,….38 competitors in 3 classes. I visited the CIM several times, great fun, STRONG competition!!!!

To finish some sad news.
One of our longtime friends and guests at Sportavia and a special friend to me, Maria Boettcher from Muenich,  has died of cancer on July 26 at age 81. She was one of those people who impressed others by how she looked, reacted and with her wisdom and interest, specially in soaring.
Her husband Dieter, who lives since nearly 2 years, in a house for people with dementia, survives her.
The manana tree at SPORTAVIA, was already sad , now it will NOT be used anymore.
My good friend Margie from Tocumwal, who was one of the Sportavia owners before us and who knew her well too mentioned ;
“I will remember Maria as a happy, friendly person who was still knitting woolen socks when it was 37 deg.” 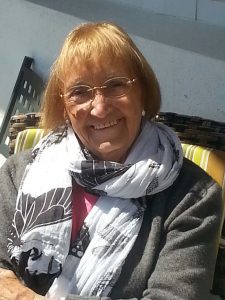 A pretty recent picture which Maria send to me a few weeks ago.