I was wondering if the great flight in the LS 1 f , on November 4 ,was OK but it   turned out to be a valid /good one , so it needs for sure  more attention!!!It was a great , better said extra-ordinary effort from Austrian pilot David Richter-Trummer. Though it was a windy turbulent, bumpy day all pilots flying in the Alps loved the foehn that day!! David stayed high, his highest point was around 5694 m. MSL [4891 AGL]  but used the ridges as well.
A 750 FAI triangle in an ASW 19 from Mc Caffery Field in Australia , by Jo Davis, is worth mentioning as well.He even topped the OLC-list last Saturday.

Nice to see all those ” elderly –with respect—” gliders flying such great distances. Also in Australia was a great one in a St. Cirrus flown by top hang-glider-pilot Attila Bertok, who flew a 500 FAI triangle making a total of  619 km. from Lake Keepit.I told you already before that he converted to soaring with us in the far past.

The SE of France had the predicted terrible/extreme  bad weather, one day later  with wind up to 180 km./h. heavy rain and 1.5 m. of snow in 24 hours .
One person was killed.The South of the Alps had in 48 hours 3 m. of snow.
They even expected a meteorological historic amount of 5 m. in South Tirol and the Dolomite’s  last weekend due to this phenomena called ” Genua depression”!Don’t know if that happened, but sadly enough ,at least 2 people were killed in Italy.

One of the biggest ” DISASTERS ” in soaring  is,….. when you send your container to an overseas destination and things go wrong…… you are happy the container has not got lost on open sea, which is GOOD, as this happens quite often in heavy weather,…it arrived in perfect condition and then,…..the crane drops the container. I heard that story last week. Disaster for some , as gliders were of course damaged one at least had a broken fuselage. [ARCUS] Hope the pilots still can fly this season.

Not everybody flies to the other site of the world or to Africa for some good flying in winter-time.
Some stay close as some of the Belgian mates , who went to St. Gaudens in France to fly a 1000 over there, using wave.
As Jean Luc Colson did yesterday with a yo-yo-type of flight in the EB 28.

FLYING WITH THE CHAMPIONS  in Kiripotib 2014,   week 1, is” history”  and on the last days of this first week the weather improved, so ALL learned a lot ,first from the more difficult circumstances on the first days , some added their very first 1000 km. to their list enjoying the real African weather and  some just missed out on a few kilometers but still learned a lot.It’s all in the game. 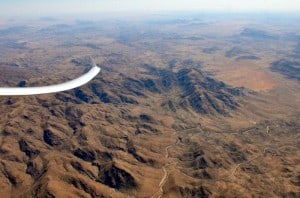 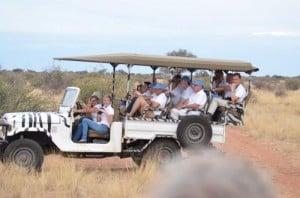 Only fun in Kiripotib either with soaring or on the ground. The outside dining area, not bad is it!?
Pictures shared on www.rent-a-glider.com

The second week started last Sunday with 3 new champions and 6 new guests/trainees.Surrounded by showers and thunderstorms to the East,  they were limited in setting a task on the first days , but Janusz and Uli each with their trainees managed to fly over 800 km. on day 2 and on day 1 over 700 km. was possible that was if you were flying with Janusz. He is there for the full 2 weeks and is not only a top champion but knows they area as the best.
On day 3 they flew 1000 km. flights again [ with Pete Harvey and Uli Schwenk] all to the W and S due to the weather.
To see how week 2 finishes you can go to ;

Bitterwasser started their soaring -season on November 4  with 2 flights , on November 8 this was already 6 and it will increase over the season.

Some of my friends have arrived in Douglas and are ready for long flights and good company. Max [Leenders] loves records, so I guess he will go for a few again this year.On the 7th and the 8th he flew already 707 and 791 km. in his own Nimbus 4DM. A good start!

Pokweni started with the first flights on November 2 with guests from Sweden and Germany . Axel Nuss flew  904 km. in the Nimbus 3 DM last Sunday.

Last Sunday some impressive events , the first one in memory of the beginning of the first world war .
REMEMBRANCE SUNDAY.This time 100 years, so extra special.
This all happened in London in attendance of  the whole royal family ,even the queen, who a few days earlier heard that their were plans to kill her with a knife. But as always she was there , very sophisticated, doing her duties. A remarkable 88 years old lady!!!
I was very much impressed with the 800.000 ceramic poppies!!!
In Berlin in Germany ,more than a million people remembered and celebrated the fall of the WALL now 25 years ago. Angela Merkel born in the former EAST, attended this remembrance, in the afternoon there was a big party at several places among them at the famous check -point -Charlie and in the evening 8000 luminous white balloons  went up in the air, one by one. These balloons marked the length of the wall and the fall. 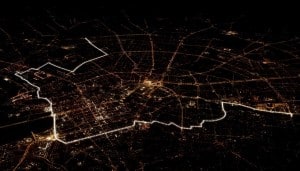 Picture from DAILY OVERVIEW and shared by KIKI.
Text;
“Today marks the 25th anniversary of the fall of the Berlin Wall. For the past two days, an installation of 8,000 glowing balloons titled ‘LICHTGRENZE‘ (meaning “border of light”), has traced an approximately 15 km long segment of the former course of the barrier that once separated the German city in two.”

Many more places in the world remembered their lost ones in all wars over the last 100 years.
I was touched by this picture shared on FB by Sandy with the text :
” Incredible tribute to the 8 million horses, donkeys and mules that died faithfully supporting their respective armies. Faithful to the end.We will remember them.” 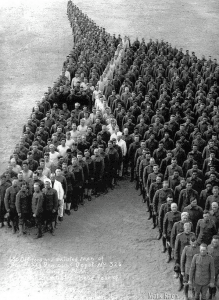 A touching picture, as shared by Sandy Griffin via FB.

On Monday “we”  remembered in Holland  in Amsterdam, the victims of the MH17. Not only the Dutch but all 298 victims.
The Royal family was there to support the nearly 1700 invited guests [family and close friends from the victims from all over the world, 18 different countries!]. A very beautiful , impressive , respectful , but also tragic/sad/touching event. All 298 names were mentioned by family or friends and only when you hear those names you realize how ,many kids lost their lives in that tragic accident on July 17 as well.
The whole ceremony,…I can only say,…It was HOLLAND AT IT’S BEST AGAIN!!!
Our prime Minister has visited Malaysia and Australia just before. They lost also quite a lot of their  loved-ones. The crew from flight MH 17 was Malaysian, all 15 of them.Aussie family members were easy to recognize through their language, the typical Aussie language, so were the people from Malaysia.
By the way ” MH 17″  will never be used again the flight is called now MH 19.

The November/December issue from Gliding International has very interesting stories again.
The Online contest and history by Elke—-the GPS system is to get a major upgrade, but, placing new satellites in earth orbit is horrendously expensive by aviation journalist  and glider pilot Rod Dew—-the French Alps  []Aubenasson] in summertime, a comparison to the N.Z. Southern Alps  by Omarama pilot Chris Street are a few of the longer stories. Also items as a warning for hypoxia, a smart skin for planes, the Vintage Glider Club Ralley in Arnborg Sweden , the Song 120, Gliding in Hungary and China and much more.
64 Pages of great reading.

Last but not least , something totally different; as a real fan from speed skating, I was pleased to see that Dutch speed skater Ireen Wust was honored with the ANOC [Association of National Olympic Committees] Award for best female athlete during the Sochi 2014 Olympics.
I presume you ALL must have heard her name at least once.
This ceremony took place in Thailand. She will attend in Asia the first 2 series of the 2015 WORLD CUP in Obihiro in Japan and in Seoul . 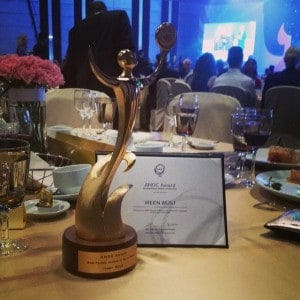 As shared by Ireen on FB.

NO NEWS next week.
Will go to hospital tomorrow where 1 malicious little spot will be removed from  my left eyelid and a beginning, not yet malicious one will be removed preventive from my other eyelid. On the 20-thiest they take out the stitches and then my eyes should be normally “open” again and  I should be new and fit ……I hope! At least I should be  in good hands over the next 5 years,  as they added me to the skin-cancer-program in Holland.

Posted on November 12, 2014 Posted in Uncategorized