Finally it seems that there is ” NO doubt” ;  MH 370 has plunged down in the ocean about 2000 KM SW of Perth [ Australia]. What it was doing there, will remain a secret for the time being, as no pieces or so have been found. We all have to believe the information and I do understand the frustration of the family and friends who have been informed in a pretty terrible way and don’t believe anything anymore.
The Aussies are helping as much as they can and one comment from the Minister of Defense is to appreciate:”  We’re not trying to find a needle in a haystack, we’re trying to find the haystack to start with” !

The South African Grand Prix is still far away , January 3 till January 15 2015, but a few pilots are already on the 18 m/ list, as Oscar and Laurens and Sven from South Africa, Tassilo , Holger and Uli [Schwenk] from Germany and John [Coutts] from New Zealand, but living in S.A.

Some good news from SEE YOU/NAVITER:
“ Oudie IGC has received the highest possible approval from the FAI GFAC committee! It is approved for “all flights” which means you will be able to claim badges and world records even with selflaunching sailplanes.

Oudie IGC is a unique self-contained portable Navigation and Flight recorder combo with a battery that will easily last the whole day flying. It is designed specifically for the needs of the Sailplane pilots.

We are finalizing the production now and will be shipping the first devices very soon. If you want to have one we are expecting a small queue in the beginning. Please contact your local Naviter reseller and let them know you want one!.” 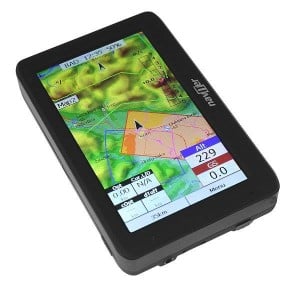 Whilst the Chinese president is in Holland for the summit, some of the Chinese glider pilots are learning how to fly in Tocumwal. One of them with a very European name , Felix, even went solo in our former glider , Blanik VH-GXO, launched by our former Scout VH SFO. Good to see both flying. 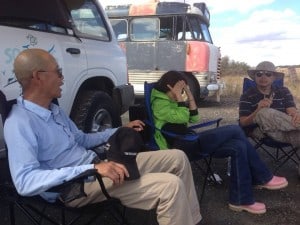 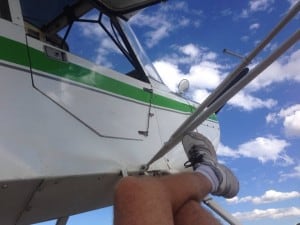 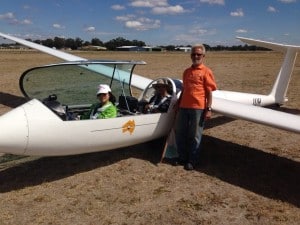 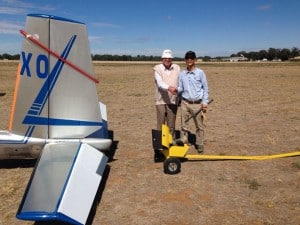 The Chinese guests, the Belanca Scout, Dieter ready to help the IS 28 in the air and Ingo congratulating Felix with his first SOLO!! Good on him.
As shared by Bruce Wilson, tuggie at the SRGC.

HAVE to say something about the Nuclear Summit in Holland ,as it put our country on the map in a very positive way.The security was , maybe too secure and some  people had a problem with that, {Obama even apologized for that] but nowadays you can’t do without, unfortunately.
All in all it was a huge success both the Nuclear top as well as the unexpected G7 top. You can for sure read more about that in your papers or on your laptop.

With the words ” Good morning, sir I love your country”  ,Barrack Obama arrived in Holland and shook hands with our mister of foreign affairs , an historic visit as a “sitting”  American president had never visited before Amsterdam or The Hague.
It also was the first visit to Europe from Obama.
A mighty interesting “circus” , around him, with 4 impressive helicopters , Black Hawks, landing as in a DEMO, 1 second  behind each other on the square in front of the Rijksmuseum in the middle of Amsterdam AND   departing that way as well. A tad later , the Marine 1  and 2 ![to avoid knowledge in which one the president is]  .
Arriving as well,the Beast ,[ very special car a Cadillac from 2009 and ready for replacement I read next year,  with everything in or on it to secure the president] …all on Dutch/Amsterdam soil.
” Renaissance”  as Michelle Obama is called in the code-world was not with him,but the “Renegade”  as Obama is called ,was  charismatic enough for both. Veni, vidi vici….!!!!!
A very informal visit in the morning with ” Hi Mark how are you” when Obama arrived at the museum and met our Prime Minister Mark Rutte and ” Barack ,welcome here in this special environment” ,when Rutte, welcomed him in the first statement from both in front of the NIGHTWATCH. Obama called this PR spot, splendid!Pictures  got all over the world.
Love this joke as shared on FB by GUESTZONE. 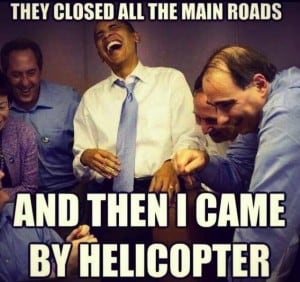 The Rijksmuseum opened her doors mid April last year and till now they had 2.7 million visitors. Specially the 17th century art , by Rembrandt and Vermeer is loved by ALL visitors world wide.

This is the 3d Nuclear Security Summit and Obama specially asked Holland to organize this one, after he organized the first one in 2010 himself .The 2d one was in Seoul in Korea.
An AWACS plane from the NATO,  from a base just over the border in Germany , a few helicopters  and 2 F16’s from the Dutch Royal Air Force flew over The Hague and surrounding to protect from above and whilst the president landed in his AIRFORCE 1 ,… Schiphol-Amsterdam-Airport  was on hold; no planes were allowed to depart or arrive for a few minutes.

Of course the summit is important for the nuclear security of our world, but the heads of state discussed in a G 7, [G 8 Russia, was not invited] the situation in the KRIM/Ukraine  as well, an other very important topic.

During the TOP no soaring from most airfields was allowed , but where they could in the SW , they flew on Monday, direction South far into Belgium [where they have all restrictions now as Obama visits our neighbors today; 100 year WW1 will be remembered] and got nearly 500 km. { 442 triangle}  in an ASH 26E. On Tuesday another nice sky but till this morning the airspace restrictions were in place.
Though airfields out of reach of the forbidden airspace [more east] were open and pilots flew from Terlet nearly 500 km. in a Discus bt and Ventus ct/18 m. 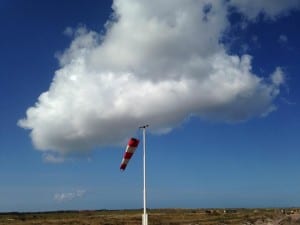 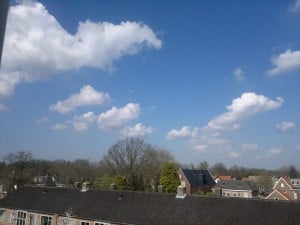 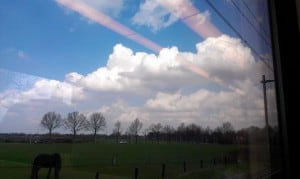 Another nice wave flight from Jim and Dennis;”A fun commute from our new Minden home to our old Rosamond home.”;1.429 km. For the full comment you can read later what they have to say more about it on the OLC.

That’s it for now,after some pretty cold nights, spring feels as it should for this time of the year with 11 dgr. up to 15.
A bit fresh after over 20, but  we have to do with it.
Cheers Ritz