And then I am talking about Aboyne [Scotland-UK Mountain comps 2013], where the “hoped-for-clearances ” , not arrived …..so more scrubbed days, but nice pictures and a great video, from wave and other interesting clouds, at ;
http://www.flickr.com/search/show/?q=ukmsc2013&s=int

In the 16 year history , they have had only once a 2 day camp, this year will be added, as the last day was cancelled for  cross country, after trying hard.
Winner from the distance competition is Ian Tait and from the height-climb Stuart Naylor; 31.726 ft.
John Williams one of the participants [ he finished the comps as number 3] flew yesterday,  South from Aboyne,  a 661 km flight [ 330 FAI triangle] in the ANTARES 20m. and topped the OLC list.
“Low level wave for a 300km triangle at 134kph“. Not bad!!!!

Also marginal flying in Chilhowee, but still 6 out of 9 days!!!
Rand one of the co-founders of SOARINGCAFE flew this competition and said:
“Sunday brought the only decent weather of the contest, and was the only day when everyone finished the task.  Our CD, Francois Pin, did a masterful job in task calling of extracting the best out of a difficult situation. We were lucky to
get 6 official days out of the 9 scheduled. ”
Rand will write an article about these standard class nationals for soaringcafe.

Anyhow they finished with an optimistic look on their week of soaring: Here is the text from their site and there is more to read , to see [slideshow] and all the results are there as well;

http://www.ssa.org/Contests?cid=2222&display=results
“We’ve arrived at the end of an interesting contest week at Chilhowee.

It was a full week of amazingly weak, difficult weather – which was actually the best week of soaring weather in eastern Tennesse for about the past two months.  We saw not one day of strong conditions, but ten days in a row were at least flyable, and we finished with 6 of 9 valid days in Standard Class, and 3 of 5 days in our Regional class.

If you accept the argument (easy to support on past history) that weak weather is the best test of soaring ability, then we have a worthy Standard Class champion in Bob Fletcher.  He was the most consistent pilot here, and as a result of this win qualifies for the US Team.  He’ll compete with teammate Phil Gaisford in WGC2014 at Rayskala Finland, next June.  And don’t overlook Rich Owen: he finished second in his first national contest, and but for a landout about a mile short of home on the second-to-last day probably would have won it.”
This way you know the USA standard class participants in Finland as well.
Thanks to Andreea to check with the SSA if I could use the text.

Holland had fabulous weather, not so much soaring-weather but nice warm with 2 days over 30 dgr. which is as we call it a “tropical temperature” and NOT normal in the beginning of autumn. On Friday afternoon at 4 we had a light thunderstorm but great rain for the dry gardens. The weekend had rain again and now we are more or less suffering from REAL autumn weather [ rain and wind up to 8 bft. in the W and coastal area and only 2 in the east and that in such a small country!!!] !!!!

2 Excellent  pilots in a XLT Duo Discus , Giorgio Galetto and Vittorio Pinni, flew last Friday from Rubbiano 772 km. Nice autumn weather in Italy. Slowly , however, the number of pilots entering flights on the OLC goes down,……. it’s that time of the year again.

Some great pictures from the Libelle by Marcin May in Leszno during the JWGC and shared by Jeroen Jennen, with the comment ;
“This picture describes the whole competition! Thanks wingman” 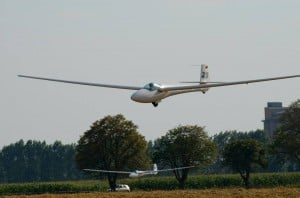 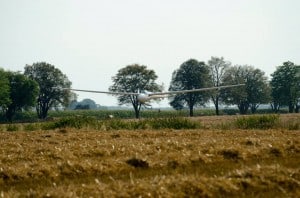 Getting older I “love” the Libelle more and more!

Talking about the JWGC; “Our” brand-new Junior World Champion, Peter Millenaar,  already announced news about his business in his interview in soaringcafe.
Here is the latest ;
“We are proud to announce that from now MillenAir is the official dealer for LX navigation in the BENELUX! We will also provide service, repairs and all warranty issues.
Please let me introduce to you the high-end LX Zeus 5.5 IGC navigation system! For full specifications check out the website: http://petermillenaar.nl/shop/index.php?route=product%2Fproduct&path=84&product_id=105
Good on him, good luck and congratulations, Peter. 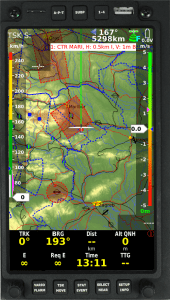 Received some short news from Mount Beauty [Australia] ;
“It’s been quite wet and the airfield has been very boggy and flying over winter
has been a bit subdued, although we have had four wave flights each time getting
up to around 10,000 ft in front of Mt Bogong using our ASK-21mi.  This has been
the first time in a number of years that we have been able to wave soar in
northerly winds.  We have also had a couple of first solos – Josh New and 16yo
James Rowe.
There are a few pictures on my Facebook page, the MBGC Facebook page and http://www.exalander.com/mbgc/mbgcnewspage.htm
Summer will be there soon.

As well as in Kiripotib ; 2 containers will go full of top gliders as I mentioned already on SOARINGCAFE. Ludwig writes;
“we had to bring four gliders, our two arcus, the ASH 25 from Christian Hynek and our brand new Antares 23E to the harbor of Koblenz, where Bernd Dolba had organized the packing of the gliders for Kiripotib. Luckily two of our gliders where at the Lange factory in Zweibrücken, so until now we had only 3700 km to drive, to have three of them there. The two containers for Kiripotib will leave on Monday the 16th of September  from Germany and will arrive there on the 25th of October.

End of October I will be in Kiripotib as well, to help Bernd, Christian and Janusz to unload the containers, we will need the first five gliders on the 1st of November for our Event “Flying with the Champions.  We are very lucky with the booking, we have 4 trainees in the first block and 6 trainees in the second block, so we are nearly booked out. ”

AND,….also news about the ANTARES 23E.
“ Only the Antares 23E is still at Lange, some final adjustments have to be done
until Axel Lange will do the maiden flight on Tuesday. [Yesterday!]
This Antares is the first 23E with the big rudder as the serials will be. Last year in Uvalde the wings of our gliders where still mounted to the small fuselage of the 20 Meter glider. On Wednesday, Wolfgang and I will drive again to Lange and I will make my first flight on the 23E , if everything is ok, as I think, it will also be packed on Thursday.” 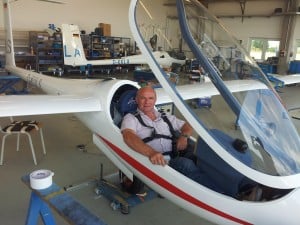 Ludwig in his new “toy”, with a “roomy” cockpit.
Courtesy; Ludwig and for more news you can read the Lange Site;
www.lange-aviation.com

Good soaring weather already in Australia specially in the East , where Geoff Pratt flew today a nice 520 km cross country [ 357 FAI triangle] flight from Mareeba in a PIK 20!!!!! Nice height as well; up to 2868 AGL .

That’s it for now CU next Wednesday and on Sunday I will be back on soaringcafe, this time no parties , so …in time.