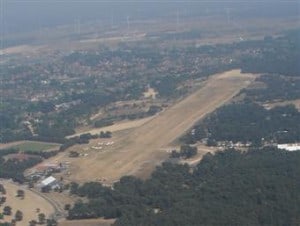 Restaurant to the left and caravan park to the right. Huge ” runway” in the middle.

What a paradise Keiheuvel is!!!! And such lovely people. The airfield is in the middle of trees and white sand, the caravan park under the trees and a high quality restaurant, meeting -place for everybody, on  side. It feels so at home, maybe because I was there already when I was [really] young. Looking forward to my visit!

In Lüsse they had day 2 on Wednesday  with a lot of re-launches at noon, but also finishers in the early evening. But not a lot . Only 18 in club class from 43 made it home and 32 from 42 in standard class. Tough day!!!!
Still 1000 points for the winners in each class , for that reason big losses in points as well when you were on the wrong site. Good day for Alfred Paul from Holland; he is on spot 1 overall after 2 days in standard class.

On Thursday [ today and day 3]  early starts at 11.15 with standard class upfront. Great launching over there as I read that this class was in the air at 11.39!!!
In ONE hour they got them all airborne ; great job!
Startlines opened at 12.05 and 12.37 and the weather was just GOOD!
So I presumed not so many outlandings.
Pilots had 345 km. [st] and 301 km. to fly and went direction S. first and then to the Polish border for some well know after Leszno.
In standard class all 41 returned home, best was Mario Kiessling , Super Mario, with 120 km./h .which was  11 km. faster then the runner up. Overall after 3 days some strong pilots; Mario, Alfred Paul and the 2 Levins.
In club class it was Gerrit Feige who just won with 100.95 km./h flying together with his mate Lars Hagemann, also in St. Cirrus with 100.79 km./h.
Gerrit  and Lars were last on day 2 after an outlanding close by at 34 km , both gaining only 78 points. Today they got the most points, 995 and 992. Good on them!!!

8 Days to go so I will come back on Lüsse when I am back.

Last day today with a 2.30 AAT  in all classes, a day with a lot of wind , forcing a few pilots to either land or virtual land , one even in the fence at the airport, as the gliders and storm arrived both on the same time, as Clara mentioned.
I saw  a Finnish pilot land against the fence, a few years ago, only damage to the glider, pilot then was  not hurt.
In club class  Andrea Tomasi won and as these scores are preliminary they can still change ,but Andrea would finish overall on spot 3.
In Standard class Reinhard Haggenmuller was the best on day 10, John Coutts will win as he is about 500 points ahead of his country mate Ben Flewett.
In 15 m. no big surprises, Dane, Leigh and Ricky.
In 18 m.Louis won and came closer to Peter but it was not enough. BUT Afandi outlanded ,…..loosing about 350 points, so Louis will finish on spot 2 overall. Young Davide passed by as well,  so he is on spot 3 and Afandi….. he unfortunately had to be satisfied with a 4th place.
In open/2-seaters Aldo won the day and the Leutenegger team lost a few points by being on spot 8, but no worries they had points enough. Bad day for Alvaro who landed out ; only 205 points for him.

It looks like the scores are pretty definitive, though not yet official. Champions in Rieti will have their prizes tomorrow at 9;
Club class; Lucio Bordin
Standard class; John Coutts
15 m. class; Leigh Wells
18 m. class; Peter Hartmann
Open /2 seaters; Leutenegger/Beudke

For all other scores please look at www.soaringspot.com Thanks!

With a 3.30 AAT , a 313 km racing task and a 400 km. one , Bailleau had a good last but one day. With hopefully one day to go the highest scores in each of the 3 classes are at this stage for Holland, Germany and Belgium.

For the latest news and the concept of the 3 classes in Bailleau, you can read http://2013.planeur-bailleau.org/  and the scores will be there and also on www.soaringspot.com

Good flights from Bayreuth and Fuente today where another friend Michael was added to the ones already there! Have fun!

As I will not be there on Sunday,  already this latest news today
on  Thursday evening August 15 2013.

Posted on August 16, 2013 Posted in Uncategorized