10 AM;
The meteo forecast from TV for today here  is not splendid, even pretty bad , but there should be always hope! A bad morning with bad wind gusts is what they think , but ,… maybe better in the afternoon. Let’s wait and see.
Briefing at 10.30 ,…gliders in the box when asked for but not yet and ….weather from Hans, he might bring “joy”!
In the evening the BBQ is on, so at least some people will stay instead of going home.
NO JOY, unfortunately……no weather to fly,…DAY 3 CANCELLED at TERLET! 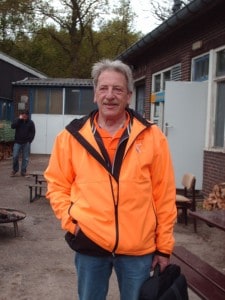 As you can see Hans wears his rain outfit and in ORANGE!!!!!!! 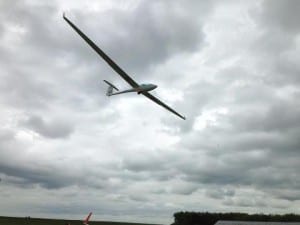 Picture from the UK ASG 29e  from Graham Smith
as shared on FB by the AAVE.

The Hahnweide day was a bit better yesterday. THEY FLEW! At least in the 3 classes which got a task. The “window” to fly in was small but OK. Typically UK weather and 2 UK boys won the 1.30 AAT -day in 15 m. class!
In the open class Alexander Späth lost some points as he finished on spot 11 .[1.30 AAT] but he is still on spot 1 overall.
In the 2 seater class Ludwig and Holger flew best again starting at 5 PM and racing over 153 km. in 1.37! But,….when I was having fun, they out landed at day 4 and lost more than 500 points. So,..they won 2 days but are “only ” on spot 8 with only today to go!
LAST day today and they seem to go for it, though showers are forecasted as well and nothing has changed at the field  looking at it as “mud”.
Gliders in 18 m. and standard class are ready to start at 12!
Later more , will be updated!

The Danish 3013 Nationals in 5 classes have only had 2 cancelled days! So lousy weather there too.

Fatraglide 2013  was nearly the Lubor Kuvik-show. In the combi class he won 3 out of 4 days in the 18 m. ASG 29E. He tops the list with more than 300 points on the runner up and with that he is the CHAMPION!
2 Days in the club class with a 2.30 AAT and a 251 racing task and a winner in an ASW 15 and a local runner up in a St. Cirrus.
Agnete ended in her Libelle on spot 5!
Not the weather they hoped for at Martin Airfield but the annual- final-goulash-dinner and the good beers and great wines tasted as good!

The Swedish Qualifying Grand Prix is not doing too bad with hopefully day SEVEN 7 today; task 227.3 km . What a pity only 5 pilots “perform” in this GP.
Gintautas is still with 22 points on the top , but Uli is climbing up the list quickly and has 18 points now!

After the BBQ I will update those who not follow it directly tonight with news from Hahnweide. Now  for a walk with the umbrella and a few pictures from the birthday I visited. 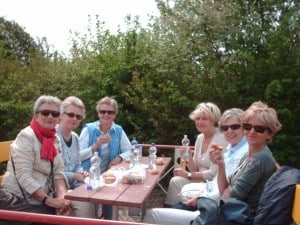 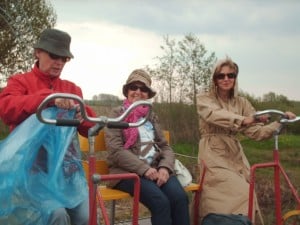 The first 2 girls to the r. are highschool friends the other 3 are friends from “kindergarten” when we were 4 years old!