The Qualifying Sailplane Grand Prix  started yesterday [May 4]  in Langtora in Sweden and after a few mostly cancelled practise days due to the weather they continue till May 11. Host is the Stockholm Soaring Club and the CD is well known pilot Ake Pettersson. 20 Pilots were allowed,  only 5 showed up / had time,  amongst them Uli Schwenk from Germany and Gintas Zube from Lithuania.  On the picture below from Ake Pettersson you see cloudstreets about 200 km. N. of Langtora during an over 1000 km flight in the past. And the airfield of Langtora seen from the N.W. in the middle of the picture. They were able to  fly on day 1 and 3 from 5 finished after the task from 116.6 km. The 4 points were for Gunnar Karlsson. A day with also 780 penalty points for one of the pilots.

Day 2, today, has no task yet but you might be able to find it later in the day on www.soaringspot.com 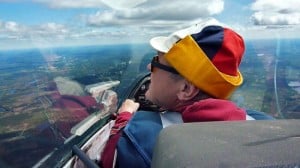 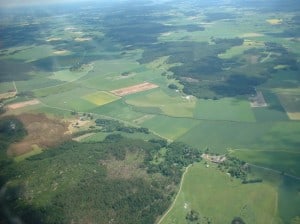 Klikx, had problems with the weather! A stable front line from about 3000 km from Spain to Russia, seems according to the meteo , the wrong-doer! And Klix is right under this line. Not the first competition this year suffering from weather,  but patience and optimism are good things. Not for all as some left earlier, but,…they missed the last day  as in each class tasks were set between 180 and 280 km. to the pleasure of all who were still there. With 2 day’s in all 5 classes and 3 days in 2 classes [club and 18 m. /open] unfortunately not a lot of flying was possible. On that last day also 33 outlandings. 15 Pilots made it home. That was Klix this year, as they say and I do believe so, statistic seen,  it can only be better next year.

According to meteo-consult this spring here is till now the coldest in 35 years ; instead of an average of 8 dgr. it is only 5. Guess the only people happy with this cool, dry and clear weather are the glider pilots. Certainly those of Holland the N. of Belgium and N. of Germany.
After one less good day on Thursday we were back in great conditions again on Friday. And HOW, with 7 over 400 km. flights up to 646 km.Special! The Gelderse ,last years leading club in the OLC stats,  added with one flight 688.98 points to their total till now , a  flight in the Nimbus 4DT,  from Bas and Etienne; 682 km. [550 triangle ] topping the first- of -May– list.
A total of 44 flights that day and 10 by the Gelderse. It brings them to spot 23, still a way to go back to spot 1 . Bitterwasser , with their excellent past season, will remain on top for a while.
Saturday when I woke up it was blue but around 10 the first good-looking cu’s were a fact.
706 km. was just[not] possible in the Nimbus 4DM, but a great flight from Ronald Termaat and Etienne Dillen  all the way to the Lünenburgerheide in Germany. Coming back the speed was damped  due to overcast but using the” help in the back”, they made it nicely home.
By the way a great  flight in Austria by Rainer Cronjäger ;1.065 in the ASH 31 /21 m. from Feldkirchen.

In Belgium Neil Deijgers and Jeroen Jennen are preparing themselves VERY good for the JWGC in Poland. Neil flew 440 in the St. Libelle and Jeroen flew over 500 km. on May 1, a great beginning  of May, with to start with,  difficult circumstances due to lots of [spring ]- turbulence,  but later it was smoother he mentioned.
He flew this time the LS 8 of  uncle Eddy [Huybreckx ,] member of one of the well known Belgium soaring families. Jeroen is related to Eddy as his sister Chrisje,  is Jeroen’s mum. There you go, it stays in the family . No secret why Jeroen flies so well at this young age; he was brought up on the airfield of Keiheuvel and flew already with family and friends as a toddler. He also visited lot’s of comps when members of the family were flying. To complete the story ,…Dennis, son from Eddy and Tim son from Marc Huybreckx , who is a brother from Eddy, …..are you still with me?…..and only a bit older than Jeroen ,are both good pilots as well. 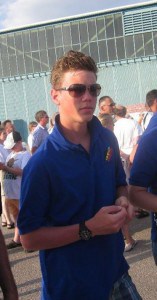 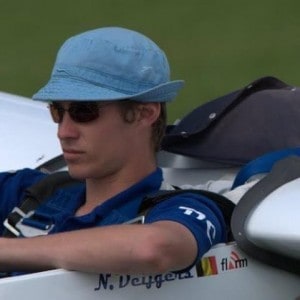 Jeroen and Neil preparing hard for the JWGC in Leszno. Neil flew 440 in the St. Libelle on May 1 , as more pilots , he “complained”  about the turbulence as well.

The Teuge- 2 -day-competition –organisers here in Holland, will clap their hands with this weather. It is flown in 3 classes and the winner will have a special prize; a flight in the Extra 300 with aerobatic pilot Ewald Polinder, one of the sponsors, WITH  camera’s IN the cockpit! Tasks from yesterday are on the picture below, shared by the boys from glider tracking. You can follow the pilots today on live.glidertracking.com .
The “boys ” , Frank Hiemstra, Jip van Akker and Jens Bouma, will be on Terlet during the nationals so from Friday onwards you can follow the comps as well.  www.glidertracking.com 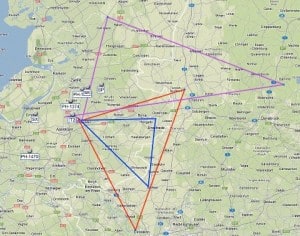 Day 1 at Teuge was won in club class by Sander Luimes flying the 272 km. in 3 hours 15 in the LS 4.
In the mixed class Siem Troost won the day preliminary in the LS 8 .

In Japan Takeshi is still on a mission! One day he will fly in his Discus b T, the 750 he really would like to fly in wave in Japan. He will succeed,..this time another 706 km. Yesterday Nagano, Itakura and  Sekyado were active even with a 500 k in the duo discus. Good to see that!

He was last week at the AERO in Friedrichshafen,…. on May 1 he flew back from a DEMO in the Zillertal in Austria in his Micro Jet. He announced a technical problem and an emergency landing at Innsbruck Airport. He could not reach it anymore. His attempt ended in tragedy in a paddock . Guido Gehrmann only 38 years old, died. He was a member of the Flying Bulls Team and he  was world champion hang gliding in 1998 and participated in several top comps and several World Games. “Guido was respected for many years with the Flying Bulls not only as an excellent pilot but also for his wonderful personality” I read on their site. Sad very sad for his family and many friends. He will be greatly missed…RIP. I found a picture on internet, Guido on  the cover of the Cross Country Magazine in 1998 and I share it with you as a tribute. 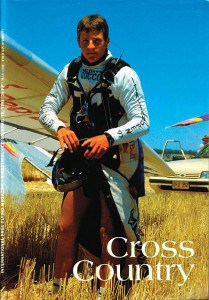 I told you about the 10 F 16 planes one orange in the middle as final -touch- FLY- BY on our Queens day. Found a 1.35 video put on by Bart [Konings] on FB .  Unique !!! Look at the FB site from the royal airforce; Koninklijke luchtmacht. Here is one picture they added on their FB. 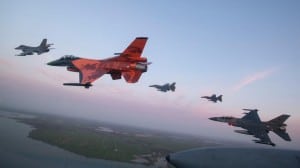 As shared on FB by the Royal Airforce.

Last but not least, I received the May-June issue of Gliding International yesterday and was impressed with the pictures and story about Gavin Wills and “his” OMARAMA; The Wills dynasty written by veteran journalist Rod Dew. 21 Pages in total of stories and spectacular pictures of Marty Taylor in the back of the Duo Discus flown by 27 year old French Gabriel Briffe, an instructor from St. Auban. A “must-see and must-read”!! Further on articles about
—-the AOS 71 a new side by side 2 seater from Poland
—-an evaluation of the ANTARES ELECTRIC, by Aldo Cernezzi
— Ross [Macintyre ] reports on the IGC meeting in Holland
—-Lot’s of world aviation news
—The Detroit Tuskegee Airmen Glider club and much more.

That’s it for now, My next week will be full and busy so be patient as I do not know myself whenever I have time. From May 9 I will be at Terlet to cover 3 days of soaring during the Dutch Nationals. A lot of comps started yesterday ,   try to keep keep an eye on them.

In soaringcafe today an exclusive story about Kathrin Wötzel, glider pilot and artist!

Cheers Ritz on Sunday May 5 ,the day we celebrate our FREEDOM. Yesterday we remembered all the people who died for this freedom.

Posted on May 5, 2013 Posted in Uncategorized