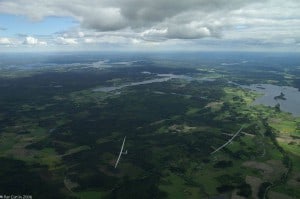 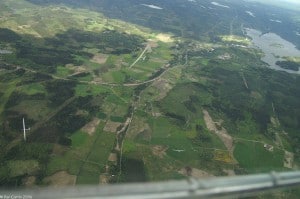 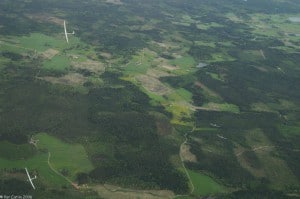 6 Fantastic pictures   from the dvd,  I received as a THANK you for my job as editor during the WGC in Eskilstuna in 2006 , as said before ; the last multi class comps.  Withpermission , I can share them with you all as well. A pity if not everybody would be able to see them, is n’t it?  These pictures are from Per Carlin!!! You can click on them to enlarge.
On the WGC dvd you also find all the articles I have written , all results and lot’s of albums. KG Jonsson-Finne , one of the best web masters I have ever met, is the BIG man behind this dvd.
From Italy I had that wonderful book about the JWGC and WGC in 2007 and 2008. All my stories , the results and the weather and great pictures, a wonderful book. And also from Finland I received a great dvd from the EGC in 2005. Can’t show you the pictures from the book, but a lot of  dvd pictures will be on, have to ask permission from Silva first for the Finland ones.

It is “cucumber time “  in the OLC. Not too many flights in this time of the year. Yesterday 15 mostly in the USA and in Australia at the practise in Lake Keepit. But Gerard Lherm was pretty excited about his 461 km. from St Martin de Londres ….and that is in the mountains from FRANCE.
The overseas season is over and the season here starts soon. Hope it will be an exciting and weatherwise good one. Read somewhere that this El NINA might give Europe a nice spring and summer.

IATA the international organisation for the aviation world,  has announced, as I read in the paper,  that in aviation , 2010 was the safest one compared with the amount of flights.
” Only”  one accident on 1.6 million flights.Conclusion ; flying is pretty safe. Though…..world wide there were 96 accidents and 23 of them claimed lives. A total of  786  lives, so that is still a lot certainly, when it concerns people you know.

One of the first big comps is the Pribina Cup  in Nitra , I wrote about it a while ago.
Another big event is in the North of Italy. From March 25 to April 4 , the  39th, 2011 Trofeo Internazionale Citta di Torino will be flown in…..yes you guessed well,  Torino. 20 Pilots on the list at this stage. Nice to see father and son Leonardo and Ricardo  Brigliadori  are going to fly together  in the duo discus and Luciano Avanzini in the ARCUS T !!!
In 2 days, on the 25th the Lake Keepit Regatta starts, just to remind you.
Like in Narrominein December top/experienced  pilots help you to improve your cross country skills. 23 Pilots are in it already and the max is 30 so if you always wanted to upgradeyour skills at a real nice airfield, with real nice  pilots, who know what it is all about, just go to Lake Keepit.
They practised with nice weather.

Whispers from the UK  !!!!   The Telegraph mentioned that there are “voices ” in the UK , who would like to see the summer- time 2 hours ahead !!!! This way the longer evenings would bring a lot of money in from tourists spending more on a longer evening!!!  Also the electricity could be saved and they predict less accidents!!!
Others are against those plans as the mornings will be darker, difficult for kids who have to go to school and more morning accidents.
I guess this remains only an interesting idea! Scotland seems against it and they need their voice as well to get those plans through parlament  . Doctors are against as they foresee health problems. Let ‘s wait and see!!
At this stage I am not going to check what my UK soaring friends think about it.

From the USA  I received a reaction on my link to the Concordia  from the Soaring Cafe and as they are going to send me updates  when there is new news , you will be updated straight away as well.They showed the link to the interview with Bruce and so we help each other, even when we have never met or had contact before. No worries we share the love for the sport and are spreading the word from what happens in our soaring world with small, big and heavy items.This is, what they amongst other things, said:

—-We would like very much to collaborate with you swapping links and perhaps posting some of you articles directly.
The Soaring Cafe website is doing quite well with more visits and page views than we initially expected.  In just seven short weeks, we have had over 26,000 visits from 12,400 visitors from 90 countries creating over 88,000 page views — and, all of these stats continue to rise on our 30 day running average.—
Continue visiting their site !

Very sad news from Libya  where like in Tunisia and Egypt before, the people think it is time for change! In Libya the protesters got a very hard reply on their actions even by low flying fighter jets and helicopters. But when colonels disappear in their fighter jets and helicopters to ask for asylum in Malta, it says enough that not everybody is behind the Ghadaffi -clan. Let’s hope there will be peace soon everywhere in the East.
Holland has send a military DC10 to pick up 125 people but as the tower at Tripoli, was not occupied they had to stay in Eindhoven till they got permission.Last night they arrived back at Eindhoven Airport with only 30 Dutch people, the rest could not make it in time to the airport and about 70 people from the UK, Belgium and the USA , VERY happy to escape the tragic, nearly wild events.

And what about Christchurch on the South Island of New Zealand??  Terrible to see that they had another earth quake , 6.3 on Richter ,killing at least 75 and more then 300 seem to be UNDER the rubble.Last September they had one , then a “little “one over Christmas, when I was in NZ and now a damaging one again. The cities center has been hit and the beautiful cathedral fell on one side in a heap/ collapsed.
I only found out now,  that 12.000 Dutch people visit as a tourist NZ every year. Received a link from Vanessa to the ABC news  and for those who want to read more about it , here it is;
http://www.abc.net.au/news/stories/2011/02/22/3145879.htm

I finish with another 3 pictures from Sweden in 2006.  Now it is minus 20 there in the night!!!! And still far under minus during the day. We had 2 cold days as well withminus 9 but with the wind- chill- factor it seems to have been – 18. The sun however was shining brightly! I did not feel that, but it WAS cold! Next week 10 dgr PLUS, but ….also rain!!!!! 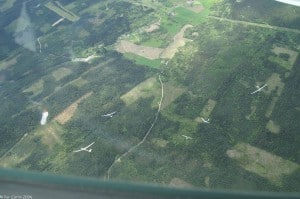 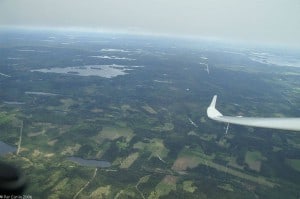 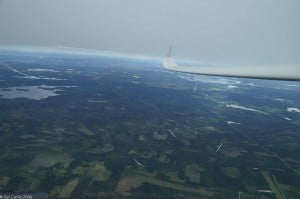 CU on Sunday and….Spring 2011 is around the corner, as on March 1 the metereological spring starts here and …….autumn down under. I loved autumn while living in Tocumwal. Cheers Ritz